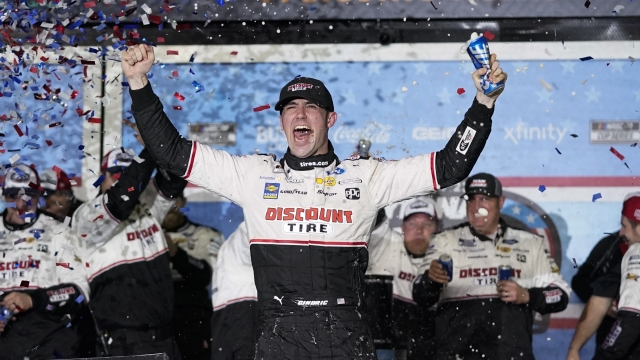 This was the first career Cup victory for the 23-year-old Cindric, who was promoted from the Xfinity Series.

Roger Penske had one rule at the Daytona 500 for his drivers: Do not wreck each other.

His orders were followed Sunday night when Austin Cindric worked with teammate Ryan Blaney over the closing laps to win the Daytona 500 as a celebration of Penske's 85th birthday.

It was just one year ago that Penske drivers Cindric, Joey Logano and Brad Keselowski all crashed while racing for the win on the final lap at Daytona International Speedway. It took time for tempers to thaw as Penske made his expectations clear to his drivers.

Cindric was the leader at the start of the two-lap overtime shootout with Blaney beside him. He was driving the No. 2 Ford, the flagship car at Team Penske that was vacated at the end of last season when Keselowski left the organization, and now Keselowski was behind him determined not to get beaten by his replacement.

But Cindric switched lanes as soon as he'd cleared Blaney to drop in front of his teammate so the duo could hook together for two final trips around the track. Blaney made one desperate attempt up high to get around Cindric, but Cindric threw a huge block that forced Blaney into the outside wall.

Bubba Wallace then surged even with Cindric in the bottom lane, forcing Cindric to forget about Blaney behind him and focus on beating Wallace to the finish line.

“Oh, my God. I’ve got so many people to thank,” a stunned Cindric said after climbing from his car and saluting the capacity crowd of some 120,000 spectators. "First and foremost Roger Penske, happy birthday!"

It was the first career Cup victory for the 23-year-old Cindric, who was promoted from the Xfinity Series to replace Keselowski and run for NASCAR’s rookie of the year honors.

The win was the third Daytona 500 victory for Penske, who also picked up the trophy in 2008 with Ryan Newman and 2015 with Logano. Ford Motor Co. has won the Daytona 500 17 times, including two in a row.

Cindric is considered the first rookie to win the Daytona 500, although Trevor Bayne won in 2011 but was not eligible to run for rookie of the year in the Cup Series. Cindric made his Daytona 500 debut in last year's race, which was decided by a last-lap collision that collected Cindric and his Penske teammates. All the Penske cars ended last year's race in a ball of fire.