Rosetta Finds Earth's Water May Not Have Come From Comets 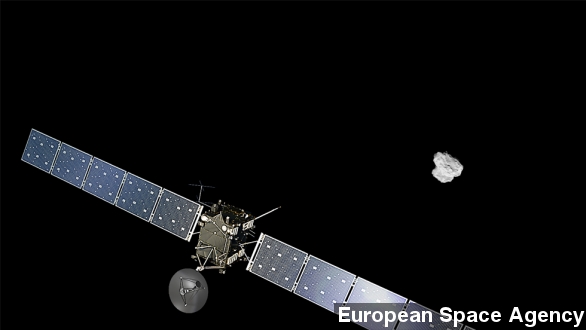 The Rosetta comet mission has released its first findings, showing comets like 67P probably weren't the origin of Earth's water.

The first findings from the world-famous Rosetta mission are in, and comet 67P has thrown cold water on the leading theory for the origins of Earth's oceans.

The new study looked at water on 67P's surface and concluded comets might not have brought water to Earth after all, despite several previous findings pointing in that direction.

Scientists aren't exactly sure why Earth, unlike other rocky planets like Mars and Venus, has vast oceans of liquid water. One explanation is that as much as half of the water currently swirling around our planet came from elsewhere. (Video via NASA)

And though last month's mission to land a probe on comet 67P might have gotten most of the glory, it's the orbiting spacecraft that's helping to answer whether comets were Earth's water source. Here's how:

At some point, we've all learned that water is one part oxygen, two parts hydrogen, but sometimes one of those hydrogen atoms can have a neutron tagging along, making the water molecule a bit heavier. The difference doesn't affect the way water behaves, but the ratio of heavy to light molecules can tell scientists whether two water samples came from the same source.

As you can see in this graph from the European Space Agency, the comet's water is way heavier than Earth's. That kind of throws a wrench into the comet theory.

The lead researcher told the BBC, "It is more than three times higher than on the Earth, which means that this kind of comet could not have brought water to the Earth."

That was a surprising finding, because Rosetta isn't the first spacecraft to study the water from comets.

A NASA probe called Stardust captured water vapor from a comet as it passed by Earth in 2004, and in 2005, another probe actually smashed into a different comet, allowing scientists to study the resulting dust cloud. Both of those missions suggested the water on comets shares an origin with the water on Earth.

The next-likely contender for the cause of Earth's oceans is asteroids, though scientists say we can't rule out comets based on this one study. Maybe 67P is just weird.

This video includes images from the European Space Agency.