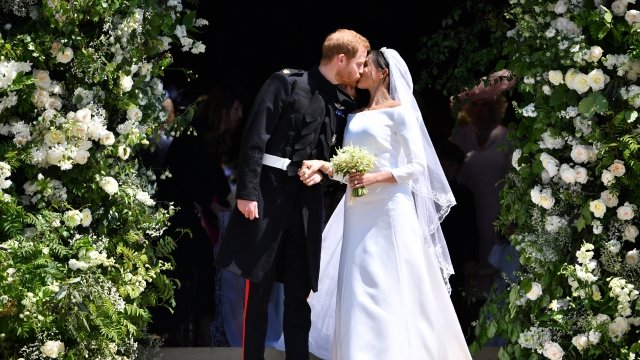 The wedding of Prince Harry and Meghan Markle broke from many royal traditions.

The royal wedding of the new Duke and Duchess of Sussex went off without a hitch. But the fairytale-like event broke from many royal traditions.

Prince Harry chose to wear his Blues and Royals dress uniform but kept his facial hair. Traditionally, the military uniform is worn only with a cleanshaven face. But, Harry's grandma, Queen Elizabeth II, gave him permission to rock the beard.

Then there's the bride, Meghan Markle — an American, biracial, divorced actress. Markle's father couldn't attend the wedding, and in a move many deemed empowering, she chose to walk herself down the aisle and not be given away. Harry's father, Prince Charles, met Markle halfway and accompanied her to the altar.

It's something that hasn't been done since 1960, when Prince Philip accompanied his sister-in-law Princess Margaret down the aisle.

Prince Harry and Meghan Markle's wedding will end up costing around $43 million, according to some estimates.

And in a break from royal wedding tradition, someone other than a senior member of the Church of England led the sermon.

Rev. Michael Curry, a Chicago native and the first African-American bishop to preside over the Episcopal Church, gave a passionate speech quoting Martin Luther King Jr. and referencing lyrics from "Down by the Riverside," a spiritual song once sung by slaves.

And then there was a rare performance for a royal wedding from a multidenominational gospel choir. The Kingdom Choir sang Ben E. King's 1962 hit "Stand by Me."

The wedding was a modern take on a royal event but ended like most weddings — sealed with a kiss.