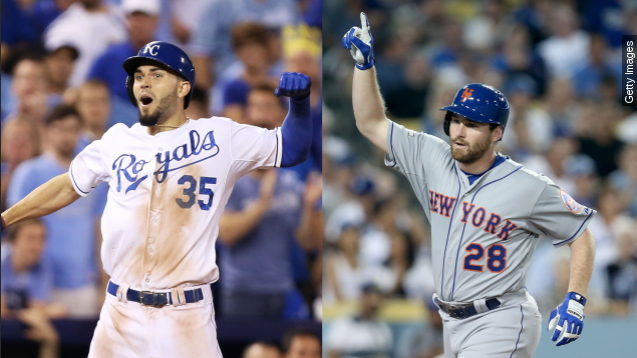 While the Royals and Mets have totally different styles of play, their fan bases can commiserate over a rough past few years and hope for the future.

While the Mets surprised everyone with an impressive crop of young pitchers who brought the Amazins to their first Fall Classic since 2000.

But the last two ballclubs standing have a lot more in common than just wearing blue. For starters, their fans have been equally downtrodden over the past few decades.

Former Wal-mart CEO David Glass took over the Royals in 1993 and immediately rolled back their budget by millions of dollars. Without shelling out money for players, Kansas City's averaged a dismal 72 wins during his tenure.

But that's nothing compared to Mets owner Fred Wilpon, who invested about half a billion dollars into Bernie Madoff's Ponzi scheme. Whoops.

Poor ownership probably only made things that much tougher as both teams' in-state rivals have seen nothing but unfettered success.

The Yankees are easily the most successful team in baseball with 27 championships, compared to the Mets' total of two.

The Cardinals have brought 11 titles to Missouri, but they did lose the Fall Classic to Kansas City in 1985, giving the Royals their only championship.

But it's hard to blame the Mets or Royals for not having nearly as many titles. They just haven't been around as long.

Both teams entered the majors during the 1960s expansion era. Until 2015, every World Series had at least one team that had been around for the original World Series in 1903.

No matter who wins the pennant, it'll be a welcome sight for their long-suffering fans. The Mets haven't won a World Series since 1986, but Royals fans have suffered just a bit longer. They last won the year before, in 1985.

This video includes images from Getty Images and Boston Public Library / CC BY 2.0.