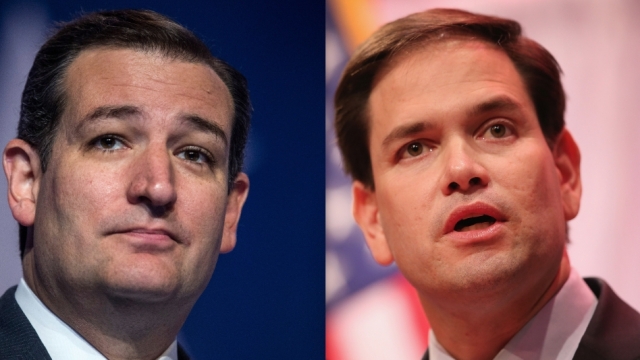 Some of the candidates' supporters would likely go to Donald Trump.

There’s a problem with a popular view among political pundits: that Marco Rubio and Ted Cruz need to stop splitting the GOP to stop Donald Trump.

"Any way you do the Republican math, the party’s five candidates are splitting the vote," CNN reported.

"No one can stop him if they all stay in the race," Fox News reported.

Nationwide, according to RealClearPolitics’ average of multiple polls, Trump is leading the GOP field with 35.6 percent. Together, Cruz and Rubio have 37.2 percent — a little more than Trump.

And if you look at South Carolina and Nevada, which Trump won, adding Rubio and Cruz’s support together could outpace Trump.

But here’s the problem with these calls for one of them to drop out to stop Trump.

When it comes to second choices, more Cruz supporters say they would switch to Trump over Rubio (30 percent to 21 percent), according to an NBC News/Survey Monkey poll.

But Rubio supporters would actually go to Cruz over Trump (28 percent to 9 percent).

And Rubio and Cruz are almost tied for second place in many of the upcoming states, which doesn’t exactly pick a clear candidate to drop out.

This video includes images from Getty Images and clips from Marco Rubio for President and Ted Cruz.