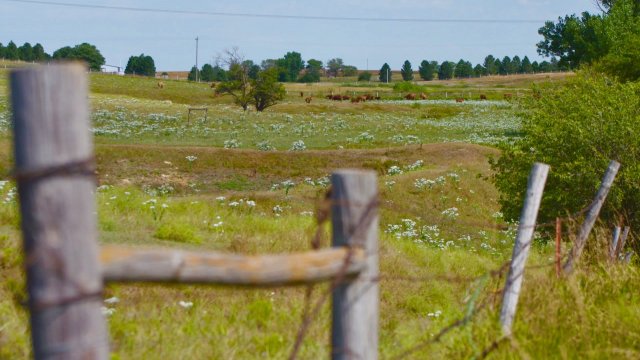 “If I had to go somewhere else to have a job to make ends meet, to cover all the bills and student loan payments on top of it, I may have never ended up back here with a store operating the way it is today,” said Nicole Ludwig.

Ludwig is the owner of Farmers & Ranchers Outlet in Phillipsburg, Kansas, where she sells apparel and livestock supplies. But she says she wouldn’t be a small business owner without the help of a student debt repayment program in the state.

“Having that little extra cushion to get you started off has been really helpful,” Ludwig said.

Ludwig participated in the Kansas Rural Opportunity Zones program, or ROZ, which began in 2012. It offers graduates with student debt $3,000 a year for up to five years if they move to one of the state’s rural counties, in an effort to combat depopulation. By the time she graduated in 2011 from Fort Hays State University, Ludwig had nearly $25,000 in student loans. But she completed her repayment plan years before she would have without ROZ, allowing her to put the money she saved into her business and other responsibilities.

“Most of it goes to our girls to help start our family and get them what they need. You know, doctor bills, everything adds up. Having that little extra income a month helps us financially be able to keep going,” Ludwig said.

The predicament Ludwig was once in is far from unusual. The average student debt balance, which sits around $400 a month, has hindered young people from buying homes, starting families and saving money — all of which pose threats to future economic growth.

But the risk is especially high in rural America, where loan borrowers are less likely to return after college. Instead, they’ve been increasingly drawn to urban metros for better-paying jobs and opportunities. A study from the Federal Reserve shows that rural borrowers who move to cities pay off their loans faster, are less likely to be delinquent on them, and are more likely to buy a home. And an analysis from a Kansas think tank estimates the rural population will continue to decline over the next 45 years. But so far, the ROZ program is showing signs of success in retaining young people.

The amount of graduates participating in the program has increased almost every year since it started. And some of the least-populous counties have attracted the most participants.

In fact, an analysis by Newsy shows that the smallest county in the state — Greeley County —  has taken advantage of the program the most. Relative to its population of just over 1,200 residents, the county has the highest population of ROZ participants. Since ROZ launched, similar incentive programs have popped up in other rural areas across the country. They offer student debt repayment help, assistance with home down payments or moving reimbursements.

In Rooks County, Kansas — another area that's had success with the program — the economic development office says the retainment results are clear, with a majority of the participants having ties to the community.

“That money that they’re not having to pay to tuition debt is money they can spend locally,” said Roger Hrabe, director of Rooks County Economic Development.

But ROZ doesn’t come without its hurdles. The cost of the program has increased almost every year since it began, and more than half of recent college graduates in Kansas have student debt.

And the industries in rural America can be limiting. The biggest employers are typically in agriculture, health care and education — leaving few opportunities for grads who majored in other fields of study.

While Hrabe says he doesn’t believe ROZ is the silver bullet that will offset rural depopulation, he does think it’s making a difference. He also says it’s an issue that should concern people outside rural America, too.

“There’s a lot of products and a lot of things that we produce that people need,” Hrabe said.