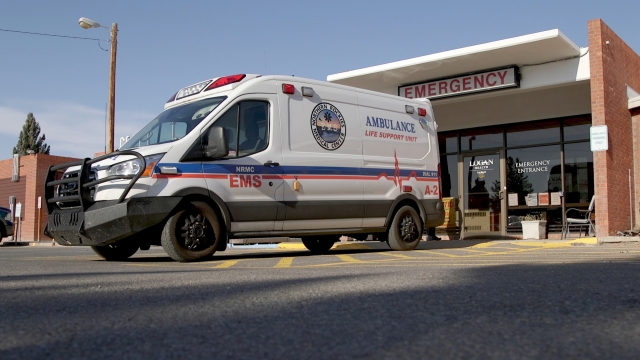 "For me, it's very close and personal," the vice president of Logan Health Cut Bank said.

Just like any parent, Taylor knows sleepless nights well. Going into the pandemic, she, along with her community, had already saved it from going under three times.

"Boy, it was like a gut punch, I mean when COVID hit, we were about to just get our wind and March 20 hit and I remember all of us just went, 'No,'" she said.

"It wasn't a joke as to whether we were really going to make it or not. I wasn't sure we were going to," she said.

Even worse, they had to eventually cut obstetrics, sending pregnant women hours away when it was time to give birth. And it's the same uncertainty for rural hospitals across the country.

One research organization shows 180 rural hospitals have closed since 2005, with 20 in the last year alone — a new record. Add another 200 more between 1990 and 2000, as a report from the Department of Health and Human Services shows.

"It's disheartening," Taylor said. "It would dramatically impact all industries and the safety. I mean, people are going to have to go a long ways if there's not a hospital or an ER."

Taylor doesn't have to look far to find community members whose lives would likely look much different without the medical and financial resuscitations performed at Logan Health.

People like Kate Morrisette — she's not sure her 11-year-old son, Alec, would still be alive after an extreme asthma attack followed by a bad reaction to a steroid injection.

"It's not a night – like, you don't really want to remember it but you remember it very vividly — just emotion."

And Linda Luther, whose husband may not have survived a heart attack without a hospital nearby.

"You don't really think about the hospital unless you're having an emergency and you need to be there, but it isn't just for you," Luther said. "It's for everybody in the community, and all of the surrounding communities that need to come here and it's really important."

And it's not just about patient care. In many cases, these rural hospitals are the heart of a small town's economy.

"If you drive across our state, any hospital that is in the community it is typically the largest private employer. And every one of those creates high paying jobs," Montana Hospital Association President and CEO Rich Rasmussen said.

So how did this hospital survive one blow after another when so many others fell? Taylor gives credit to a few things, including the most recent COVID-relief money to help small hospitals stay afloat. There's also Medicaid expansion — a provision in the Affordable Care Act that allowed health coverage for a larger pool of low-income people. Without coverage for those recipients, hospitals eat the costs.

"Other states, for whatever reason, they've chosen have not expanded Medicaid, and that has made it extremely difficult for these hospitals to remain financially viable," Rasmussen said. "And so in our state where we've been able to reduce the number of uninsured, from the mid-20s down to about 6% uninsured, is a huge impact on the smaller facilities."

Taylor's Glacier County has one of the highest percentage of Medicaid recipients in the state of Montana.

"It was critical," she said. "I mean, it made all the difference in the world. Without getting paid for those patients in the care that we're providing — I don't know how we could retain the services we have here. And we would not be the hospital where we are today, and I somewhat question whether we would even be financially viable at all."

In this community alone, Medicaid expansion means more than 2,500 people covered. And beyond those financial boosts, the community — one of the poorest counties in Montana — stepped up time and time again. First in 2001.

"They raised $600,000 to take over a hospital, and that wasn't the end of it," Taylor said. "In 2004, we hit some really hard times again, felt like we were not going to make it, and the community and business members stepped up and co-signed loans for us for over a quarter of a million dollars. We were within weeks of shutting it down."

The medical center also joined a much larger hospital group. It means a bigger support team, backup and a financial safety net.

"For many many years, we only had like seven days cash on hand at a time, right, so that's unheard of," Taylor said. "It should be 180."

Now, they have over 90 days cash on hand. The highest Taylor has ever seen it.

"Did I define it or did it define me? And I think sometimes challenging times really builds a lot of character or you don't survive," Taylor said.

And survive they did. Taylor has been CEO not once, but twice.

"Making a difference has always been a driver for me," she said.

And for the first time since Taylor started there in 1996, the fear of closing these doors permanently doesn't keep her up at night.