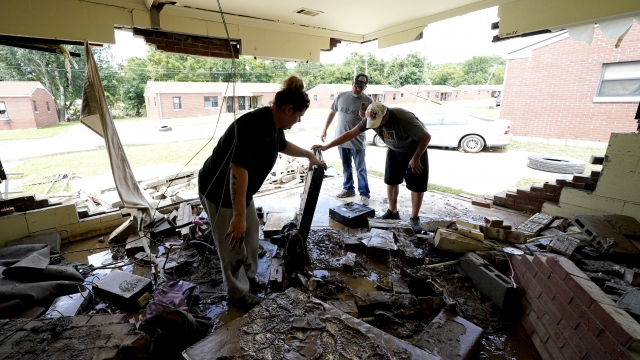 As cleanup continues, so does the search for those missing. Less than 20 people are on that list.

Friends, family, neighbors, in Waverly, Tennessee – anyone with equipment and willing to help – are cleaning up a scene of destruction.

A cell phone video shows water surrounding one neighborhood over the weekend. Residents say the flood waters came in fast, forcing neighbors like Michael Phillips to think on their feet.

"We came out the back door and just stepped up on the railing and I pushed everybody up. Then I pulled myself up and the water, the water was up to here - the highest it got was up to here," he said.

Janey Mackenzie lives a few doors down.  Her house was hit by another home that got caught up in the rushing waters.

Mackenzie had to be rescued. Her daughter was overcome with emotion.

A few blocks away, there is more devastation.

The flood waters were so strong, it actually was able to pick up an entire house and slam it up against this Exxon sign. The side of the house was left open and exposed.

The gas station's flagpole was left on its side.  The flag itself, folded on its base, is a sign of  strength as residents vow they will continue to help each other and return to their homes.

As cleanup continues, so does the search for those missing. Less than 20 people are on that list. The police department says some of those people have been found.