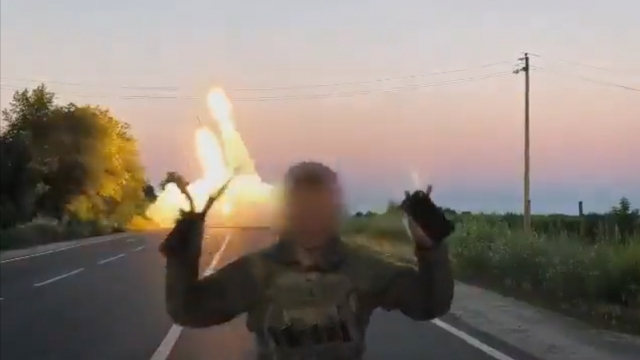 Russian forces are closer to their goal of capturing the entire Donbas region in Ukraine's industrial heartland.

It's the potent weaponry of a scorched earth campaign that, as Russian-state TV itself shows, is creating victories over wastelands.

This is Sievierodonetsk, a key city where Russia on Monday claimed victory after Ukrainian forces withdrew the day before. Here's why this is significant: these are the areas that were under Russian control before the February 24 invasion. And here's what they've added to their column to date: with Russian forces fully seizing Sievierodonetsk, the last major stronghold of Ukranian resistance in Luhansk province. Russian forces are closer to their goal of capturing the entire Donbas in Ukraine's industrial heartland.

"They have now accumulated their largest firepower in Donbas. And they can use tens of thousands of artillery shells every day on one section of the front. This is reality," said Volodymyr Zelensky, Ukraine's President.

Ukraine blames the loss on superior Russian artillery power, but they may now be increasing their combat capabilities with the arrival of an advanced U.S. weapon — the HIMAR, high mobility artillery rocket systems.

An advisor to President Zelensky posted this video that shows Ukrainian forces are now using the U.S. Mobile — the multiple rocket launcher systems in a counter offensive campaign to liberate Russian-occupied territory in the south.

He says the HIMARS are proving "way better than anything" than the Russians have, and the Ukrainians are proving they can "quickly learn and effectively control modern western weapons."

Analysis from the Institute for the Study of War says the American HIMAR in Ukrainian hands "are increasingly targeting Russian military infrastructure deep in occupied territory."

Zelensky says, despite Russia still having fire superiority, and Ukraine losing ground in the east, "we will return, thanks to our tactics, thanks to the increase in the supply of modern weapons."