Russia's Annexation Of Crimea Is Complete 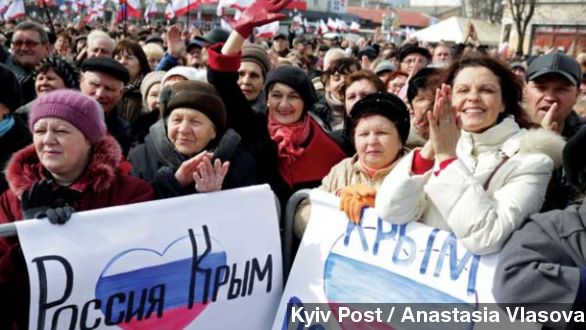 Russia's annexation of Crimea is a done deal.

Friday, Russia’s upper house of parliament unanimously approved the ratification of a treaty to formally join Crimea with Russia. (Via Russia 24)

During a ceremony at the Kremlin, President Vladimir Putin signed the treaty into law. (Via BBC)

The same day, hours after announcing more sanctions, the European Union signed a political association agreement with Ukraine — as a show of support to Kiev’s newly-installed government. (Via Euronews)

​If you remember, it was the decision of Ukraine’s ex-president Viktor Yanukovych to ditch an agreement with the EU In November that kicked off the protests in Kiev. Instead, Yanukovych had opted for a bailout package from Russia. (Via ABC)

Which brings us to today. Russia maintains its annexation of Crimea is legal, while the U.S. and its European allies say Russia is violating of international law and threatening stability in the region.

On Thursday, President Obama imposed a new round of sanctions on 20 member's of Putin's inner circle. Almost immediately, Russia responded with its own sanctions against U.S. officials. (Via The White House)

Senator John McCain, whose name was on the list, laughed it off, tweeting: “I guess this means my spring break in Siberia is off.” (Via Twitter / @SenJohnMcCain)

Wall Street didn't seem to mind either, with stocks trading higher after the news. Russian stocks, on the other hand, dipped sharply.