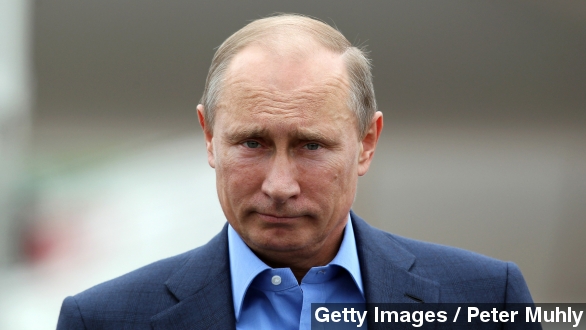 Facing sanctions, dropping oil prices and poor ruble value, Russia is heading for a recession in 2015, its first since 2009. And Putin isn't helping.

As much as Russian President Vladimir Putin may not want to come out and say it, Russia's in a tight spot. And he's part of the problem.

The country's economic woes stem from a trident of causes including economic sanctions set by the European Union and U.S., a steep decline in the value of the Russian ruble and dipping oil prices.

In November, Russia's finance ministry projected Western sanctions imposed on Russia over the ongoing crisis in Ukraine will cost the country's economy around $40 billion a year. (Video via Radio Free Europe / Radio Liberty)

Russia's heavy economic reliance on oil is also expected to dent its economy. With crude oil trading at its lowest price in years, Russia's finance ministry says the economy will lose between $90 and $100 billion a year.

And then there's the steep drop in value for the Russian ruble, which is hitting record lows and has dropped in value against the dollar by 40 percent just this year.

All of this — the oil, the sanctions, the ruble — is adding up to what NPR's Moscow correspondent calls a perfect storm.

It's leading to expectations that Russia is on the verge of entering a recession in 2015 with a slumping economy.

Putin blamed the West for Russia's poor economic forecast during an annual state-of-the-nation address on Thursday, saying the West has been against Russia for "centuries." (Video via RT)

But according to U.S. Secretary of State John Kerry, it's Russia's fault.

Speaking at an Organization for Security and Co-operation meeting in Switzerland on the same day as Putin's address, Kerry said it was through Russia's own actions that the West has been forced to isolate it. (Video via Deutsche Welle)

And a writer for The Economist said in November that Putin's bellicose foreign policy is, if anything, accelerating Russia's economic decline. Noting the cyclical nature of Putin's problem, he writes: (Video via ARD)

"A deeper foray into Ukraine would lead to stronger sanctions by Western countries. Some of them … could halt Russian trade altogether. A partial block on oil exports would fell the economy, as it did Iran's. And the more trouble he faces, the more likely Mr Putin is to play the nationalist card—and that means more foreign forays, and yet more sanctions."

Things aren't exactly going well for Putin within his own country, either. Hours before giving his address, Islamic militants attacked Grozny, the capital of Russia's restive Chechnya region.

A firefight that lasted until daybreak resulted in the death of 10 police officers and nine militants. (Video via YouTube / TheMedvedova)

Putin only made a passing reference to the attack in his state-of-the-nation address. By the end of his speech, the Russian ruble had reversed a small gain it made earlier in the morning.

This video includes images from Getty Images, the U.S. Department of State and julochka / CC BY NC 2.0.