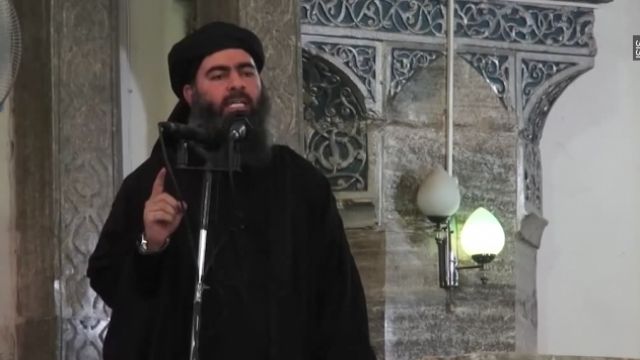 The Russian Defense Ministry is investigating reports that Baghdadi was killed in an airstrike in Raqqa, Syria.

The country's defense ministry is investigating reports that Baghdadi was killed in an airstrike in Raqqa, Syria, in late May. Baghdadi and other ISIS leaders were reportedly holding a meeting to figure out an escape route from the city.

Russian state-run media says the attack was carried out after drone footage showed the terror group leaders meeting. U.S. officials haven't been able to confirm the reports of Baghdadi's death.

ISIS Drones And The 'Industrial Revolution Of Terrorism'

Drones are only one part of ISIS' extensive arsenal of do-it-yourself weaponry that includes rocket launchers and rifle grenades.

Similar reports have circulated before and turned out to be false. Last June, outlets picked up a story claiming Baghdadi was killed in a U.S. airstrike in Raqqa.

And in January, reports surfaced saying Baghdadi had been "critically injured" in airstrikes in northern Iraq.

Baghdadi tends to stay out of the spotlight, appearing only in occasional videos and audio messages. U.S. officials have offered a reward of up to $25 million for information about him.