Russia Strikes Kyiv As Troops Consolidate Gains In The East 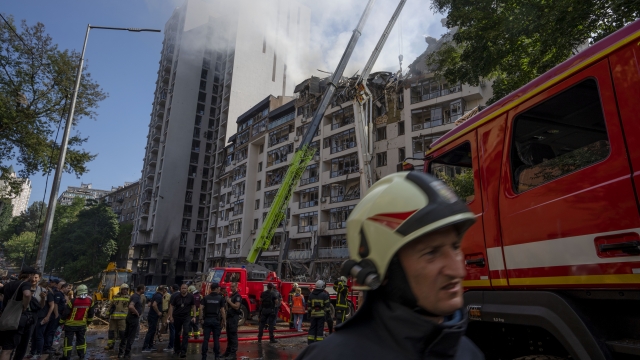 Rescuers in Kyiv, Ukriane, worked to battle flames and save civilians.

Associated Press journalists in Kyiv saw rescue services battling flames and rescuing civilians. Klitschko said four people were hospitalized with injuries and a 7-year-old girl was pulled alive from the rubble. Culture minister Oleksandr Tkachenko said on Telegram that a kindergarten was hit in the attacks.

Ukraine Member of Parliament Oleksiy Goncharenko wrote on the Telegram messaging app that "according to prelim data 14 missiles were launched against Kyiv region and Kyiv." Air Force spokesman Yuriy Ignat said the missiles were Kh-101 air-launched cruise missiles fired from planes over the Caspian Sea.

Before Sunday's early morning attack, Kyiv had not faced any such Russian airstrikes since June 5.

Klitschko told journalists that he believed "it is maybe a symbolic attack" ahead of this week's NATO summit in Madrid.

Two more explosions were later heard in Kyiv, but their cause and possible casualties were not immediately clear.

President Joe Biden, asked for his reaction to Russian missile strikes Sunday on Kyiv, said: "It's more of their barbarism," as he stood with Olaf Scholz as the German chancellor greeted leaders arriving to open the Group of Seven summit.

Meanwhile, Russian forces have been seeking to swallow up the last remaining Ukrainian stronghold in the eastern Luhansk region, pressing their momentum after taking full control Saturday of the charred ruins of Sievierodonetsk and the chemical plant where hundreds of Ukrainian troops and civilians had been holed up.

Serhiy Haidai, governor of the Luhansk region that includes Sievierodonetsk, said Sunday that Russia was conducting intense airstrikes on the adjacent city of Lysychansk, destroying its television tower and seriously damaging a road bridge.

"There's very much destruction — Lysychansk is almost unrecognizable," he wrote on Facebook.

On Saturday, Russia also launched dozens of missiles on several areas across the country far from the heart of the eastern battles. Some of the missiles were fired from Russian long-range Tu-22 bombers deployed from Belarus for the first time, Ukraine's air command said.

The bombardment preceded a meeting between Russian President Vladimir Putin and Belarusian President Alexander Lukashenko, during which Putin announced that Russia planned to supply Belarus with the Iskander-M missile system.

Russian Defense Ministry spokesman Igor Konashenkov said late Saturday that Russian and Moscow-backed separatist forces now control Sievierodonetsk and the villages surrounding it. He said the attempt by Ukrainian forces to turn the Azot plant into a "stubborn center of resistance" had been thwarted.

Haidai confirmed Saturday that Sievierodonetsk had fallen to Russian and separatist fighters, who he said were now trying to blockade Lysychansk from the south.

Russia's Interfax news agency quoted a spokesman for the separatist forces, Andrei Marochko, as saying Russian troops and separatist fighters had entered Lysychansk and that fighting was taking place in the heart of the city. There was no immediate comment on the claim from the Ukrainian side.

Lysychansk and Sievierodonetsk have been the focal point of a Russian offensive aimed at capturing all of the Donbas and destroying the Ukrainian military defending it — the most capable and battle-hardened segment of the country's armed forces.

Capturing Lysychansk would give Russian forces control of every major settlement in the province, a significant step toward Russia's aim of capturing the entire Donbas. The Russians and separatists control about half of Donetsk, the second province in the Donbas.