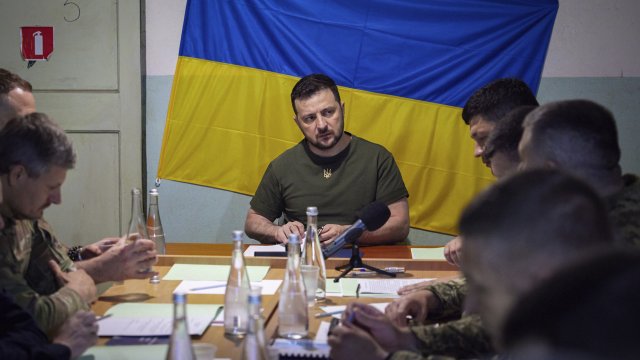 Meanwhile, Ukrainian president visited the city of Mykolaiv, on the Black Sea coast, which was hit by a military strike that killed two people.

The Russian Defence Ministry said on Saturday that their military had destroyed oil refining and fuel storage facilities in the areas of Kremenchuk and Lysychansk.

The Russian Defence Ministry chief spokesman Igor Konashenkov said that those facilities aimed to supply equipment to the Ukrainian military in the Donbas region.

The claim could not be independently verified by the AP.

The Defence Ministry also released video, on Saturday, said to show Ka-52 combat helicopters taking off and firing rounds in an unspecified location which the AP could not independently verify.

Meanwhile, Ukrainian President Volodymyr Zelenskyy visited troops defending the frontline on the Mykolaiv region on Saturday and awarded them with medals and certificates of merit for their services.

Zelenskyy took the time to interact with the soldiers and take pictures with them.

"I thank each and every one of you" he told troops "For what you do protecting our country, each of us, our families."

On the same day the Ukrainian president had also visited the city of Mykolaiv, on the Black Sea coast, which was hit by a military strike that killed two people on Friday.

Additionally, Zelenskyy visited a hospital while on a trip to Odesa on Saturday.

Zelenskyy chatted with patients and made a short speech in front of the staff, saying they were not forgotten.

"We are all proud to have doctors like you in our country," Zelenskyysaid.Zelenskyy handed out awards to members of staff before taking having some photographs taken outside.