Russia Accuses The US Of Supporting ISIS — Again 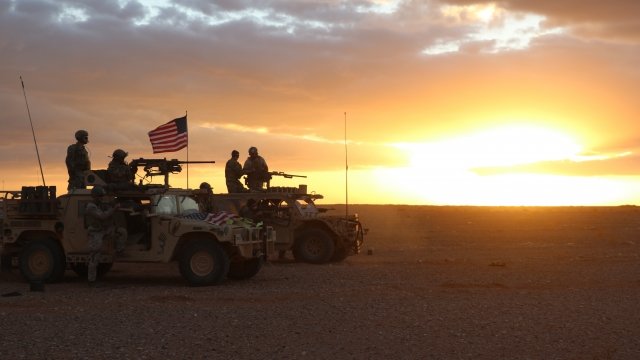 A Russian military official has accused the U.S. of training ex-ISIS militants in Syria.

A Russian military official has accused the U.S. of training former ISIS fighters in Syria.

Armed Forces Chief of Staff Valery Gerasimov told a Russian media outlet the U.S. is training militants at a military base at al-Tanf, a border crossing area between Syria and Iraq. He said that information came from aerial surveillance.

Gerasimov said, "This is essentially ISIS. They change their colors, take different names — the 'New Syrian Army' and others. They are tasked with destabilizing the situation."

The New Syrian Army is the former name of a group of U.S.-trained rebels, most of whom were former fighters in the Free Syrian Army and trained to fight ISIS.

Iraq Says Its War Against ISIS Is Over

Officials said Iraqi forces are in complete control of Iraq's border with Syria.

The U.S. has faced similar, inaccurate accusations like this from Russia in the past.

In November, Russia's defense ministry claimed it had evidence of the U.S. supporting ISIS. It released photos to support the claim, but social media users identified them as fake.

Reuters reports U.S. officials say the base in question at al-Tanf is temporary and that it's being used as a training ground for forces to counter ISIS.