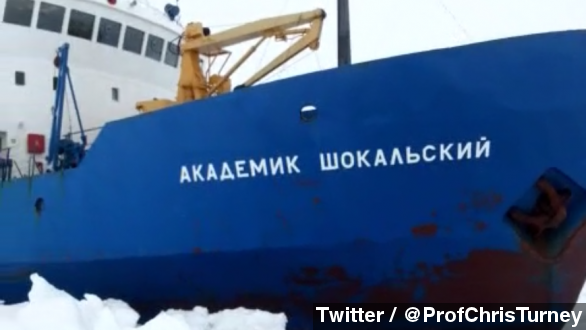 The crew aboard a Russian ship stuck in thick sea ice near Antarctica might have to wait a few more days before they can be rescued.

The crew aboard a Russian expedition ship stuck in thick sea ice near Antarctica thought they would be getting off their stranded ship Saturday, but mother nature had a different idea.

The Akademik Shokalskiy was stranded Tuesday after a winter blizzard's strong winds pushed heavy sea ice up around the vessel, freezing it in place. (Via Al Jazeera)

Stuck for four days, the 74 person crew aboard the Shokalskiy thought they would be getting off the ship after spotting a Chinese icebreaker called the Snow Dragon — one of three ships deployed to rescue them. But it too has now become stuck in the drifting ice, only six nautical miles away from the Shokalskiy. (Via Fox News, CNN)

Now, it's likely the crew will have to wait two more days to be rescued as French and Australian icebreakers work to make their way through the harsh conditions.

But the crew seems to be in good spirits. Sending updates via Twitter, Vine and YouTube to let everyone know they're doing just fine. (Via YouTube / Intrepid Science)

"We're still here stuck at Cape Delamont... any passing ships, do pay us a visit!"

Lead by Professor Chris Turney from New South Whales in Australia, the team has been on its expedition for nearly month. (Via Twitter / @ProfChrisTurney)

​​They are studying climate change in Antarctica, retracing the steps of famous Australian explorer Douglas Mawson, who lived on the barren continent more than 100 years ago. (Via ABC Australia)

The team currently isn't in any danger. They have enough food and supplies to last several more months. Professor Turney says the team will go to New Zealand with the findings of their expedition after they are freed from the ice.