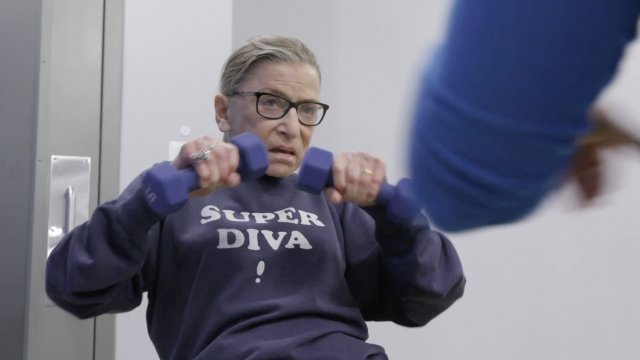 A new documentary about the rise of U.S. Supreme Court Justice Ruth Bader Ginsburg comes out in select theaters Friday, May 4.

Ruth Bader Ginsburg is an associate justice of the U.S. Supreme Court, a women's rights advocate and a pop culture icon. You may know her by a different moniker: "Notorious R.B.G."

A new documentary titled "RBG" aims to shed light on her life and career. The film has received some pretty positive reviews ahead of its Friday release — but what is it about Ginsburg that makes her so famous?

Ruth Bader Ginsburg Has Hired Clerks To Last Through 2020

The Supreme Court justice has been very vocal about her plans to not retire just yet.

"I ask no favor for my sex," Ginsburg says at the beginning of the documentary's trailer. "All I ask of our brethren is that they take their feet off our necks."

Ginsburg began her law career with a lot of firsts: first in her class, first female member of the Harvard Law Review, first female tenured professor at Columbia Law School and the first lawyer to argue to the U.S. Supreme Court that the Constitution's Equal Protection Clause extend to women.

That argument, used in the 1971 landmark case Reed v. Reed, gave both women and men the opportunity to challenge other gender-discriminatory laws under the Equal Protection Clause.

Almost a decade after that case, former President Jimmy Carter appointed Ginsburg to the U.S. Court of Appeals.

"I didn't think specifically about becoming a judge, because frankly I didn't think it was possible," Ginsburg said in 1986. "It seemed to me an area in which women were not yet wanted."

Justice Ginsburg Will Perform In An Opera â Again

She'll be a star for one night in a Washington National Opera production.

Ginsburg was sworn in to the U.S. Supreme Court in 1993, but her new nickname wouldn't come until two decades later — when a New York University law student was inspired by the justice's fiery opinions on affirmative action and voting rights. After that, the "Notorious R.B.G." became an icon.

But not everyone thinks Supreme Court justices should be treated like celebrities. In an op-ed for the Los Angeles Times, Richard Hasen, a law professor at the University of California, Irvine, argued that it's dangerous for justices to be seen as more political and less impartial.

Despite that criticism, Ginsburg's legacy is growing beyond the courtroom through her fans. The documentary "RBG" will be in select theaters Friday.