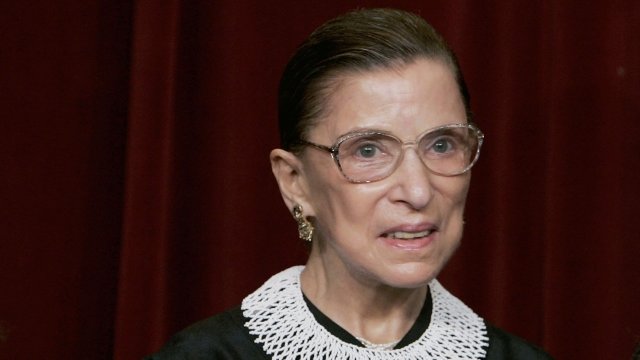 Ginsburg had surgery in December to remove two cancerous growths from one of her lungs.

Supreme Court Justice Ruth Bader Ginsburg is sitting out of the court's first oral arguments of the year on Monday while recovering from surgery. It's reportedly the first time she's missed a scheduled public argument session in 25 years.

Ginsburg had surgery in December to remove two cancerous growths from one of her lungs. The Supreme Court said there wasn't any evidence of remaining disease after the operation, and doctors weren't planning additional treatment. They found the growths while Ginsburg was being treated for rib fractures after a fall in November.

The Supreme Court justice has been working from home while in recovery.

A SCOTUS spokeswoman told news outlets that Ginsburg still planned on participating in Monday's session by reading documents related to the cases. It isn't clear when she'll return to the bench.