Ryan Ferguson Is A Free Man, Speaks With Family At Press Conference 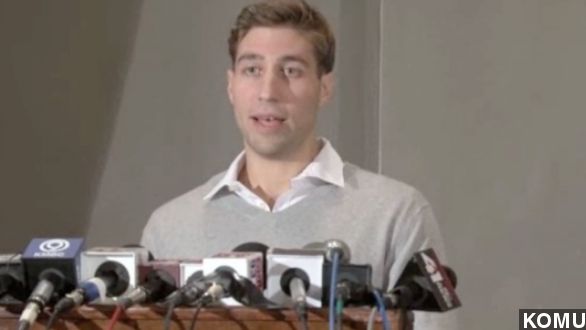 Ryan Ferguson spoke out as a free man alongside his family at a press conference in Columbia, Missouri, Tuesday night.

A man who spent almost a decade in prison for a murder he claims he didn't commit walked as a free man Tuesday.

Ryan Ferguson spoke in front of a large crowd at a hotel in Columbia, Mo. His father and attorney Kathleen Zellner also spoke, calling this an incredible day. But all eyes were on Ferguson. (Via Columbia Missourian)

FERGUSON: "I'm very glad to be here, but I want to thank the attorney general for looking at the facts of this case and making a decision based off those facts and doing the right thing."​ (Via KOMU)

FERGUSON: "It's just amazing to be here knowing that other people are in this situation and don't have the support and the help that I've had. So this is not an anomaly."​ (Via NBC)

"Ferguson was convicted and sentenced to 40 years for the murder of Columbia Tribune sports editor Kent Heitholt. But a Missouri appeals court ruled Tuesday the state withheld evidence."​ (Via CNN)

After the appeals court ruling, it was up to prosecutors to decide if they wanted to go after Ferguson again. But on Tuesday, Missouri Attorney General Chris Koster said he would not retry him. (Via KCTV)

When asked about how he felt for the family of the man he was accused of killing — Columbia Tribune sports editor Kent Heitholt — he said he hoped they would be able to look at all the facts and find justice. (Via KOLR)

In an earlier interview with CBS, and with the possibility of being released from prison, Ferguson said he looked forward to living his life as an adult.

Ferguson spent a little under a decade in prison for the 2001 murder. He was released from Boone County Jail Tuesday evening. (Via KMIZ)

Zellner wrapped up the press conference on a light note, saying one of the first things Ferguson wanted to do once free was go to Dairy Queen.