S.C. Sheriff Refuses To Lower Flag To Half-Staff For Mandela 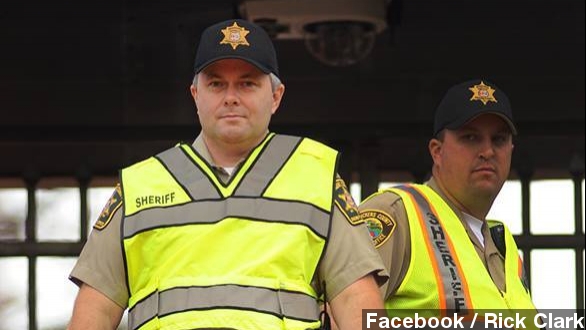 Pickens County Sheriff Rick Clark says he won't lower the flag to half-staff because he believes it's an honor reserved for Americans.

Less than 48 hours after Nelson Mandela's death, a South Carolina sheriff is drawing national attention for refusing to lower his office's American flag to half-staff.

Pickens County Sheriff Rick Clark says even though President Obama has ordered all flags flown at half-staff in honor of the former South African leader until Monday, his department isn't participating. (Via WIS-TV)

Why? In the statement he posted on Facebook, Clark said Mandela was not an American. He adds the appropriate place for the flag to be lowered is at our embassy in South Africa.

While a president ordering flags be lowered for non-U.S. citizens is rare, it has been done in the past. (Via NPR)

Clark told The Greenville News that the practice of lowering the flag to half-staff would lose its value if it was done for Mandela, but a local NAACP member said she hopes the sheriff lowers it in honor of Mandela as a sign of respect.

MSNBC points out the flags actually were lowered to half-staff at the sheriff's office — but for a different reason. Clark said it was lowered Friday to remember a deputy who died in the line of duty and Saturday in remembrance of Pearl Harbor Day.

Even though President Obama ordered flags be lowered, Clark likely won't face any consequences for his decision, as there's no penalty for those who don't follow the order.

The Congressional Research Service says the Flag Code "functions simply as a guide to be voluntarily followed by civilians and civilian groups."

Nelson Mandela died in South Africa on Thursday at the age of 95. He is expected to be laid to rest Dec. 15.