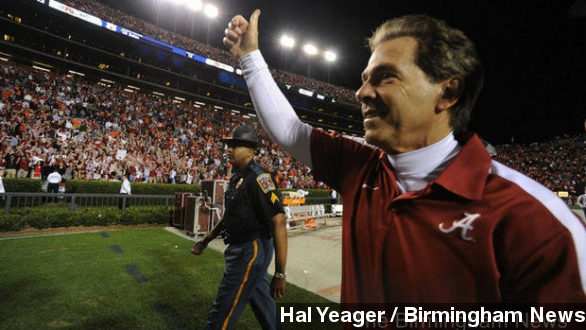 — as made evident by his recently signed contract extension and pay raise. That extension put to bed rumors of a possible jump to the University of Texas. (Via WIAT)

"Nick Saban's new deal gives him a 25- percent raise over what he was making.... and he was already college football's highest paid coach." (Via WKRG)

But, HOW valuable you ask?

With contract details now available, he's $7-million-valuable to the Crimson Tide. That's more than most NFL coaches make and more than what 12 NCAA D-1 schools spent on their entire athletic program in 2011, the last year numbers were available. (Via AL.com)

Yes, Saban's work coaching amateur, collegiate athletes helps place among the NFL's highest paid of coaches, just behind Sean Payton of the Saints, Bill Belichick of the Patriots, and Andy Reid of the Chiefs. (Via Forbes)

That's a sizeable investment, but is it worth it?

"If you're going to pay him $7 million a year and Saban makes 3x to 4x more than that amount for your university, that makes Nick Saban a great investment." (Via WVUE)

​​And a Forbes writer says definitely "The Crimson Tide have become the class of college football under Saban, winning three of the last four BCS National Championships. ... That success has been a key driver of revenue that supports athletic endeavors and academic programming. ​"