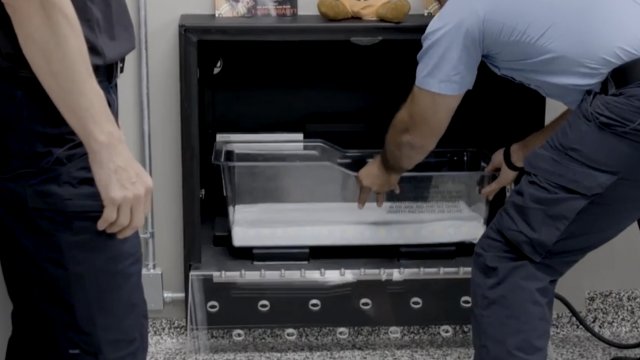 Boxes from an Indiana non-profit lock and send alerts to first responders once a baby is placed inside the box.

On one day, she held a press conference announcing the discovery of a baby found inside the devices on Indy’s south side.

North of the city at the Carmel Fire Department, three babies have been surrendered in two months.

"Once we noticed that there was a baby in here, it's just a quick turn," firefighter Victor Andres said. "We drop the plexiglass down and reach in, pull out baby, make sure baby's breathing, happy, healthy."

Once a baby is placed inside the box, the device locks and sends a series of alerts to first responders.

"The box is also heated," Kelsey said. "It's also cool, you know, so the temperature on the inside of the box stays about 75 to 84 degrees."

Since it's launch in 2016, 21 babies have been surrendered to boxes across the country, and 121 have been handed off directly.

"I saw, you know, just a bundle and just an arm moving and realized that, you know, it's a baby," Andres said. "There is a surrealness there."

For Kelsey and some of these firefighters, the mission is personal.

"When I was just a baby, my mother surrendered me over,"  "There was no safe haven, surrender laws or anything, but she found a way to surrender me over to someone else."

Kelsey was adopted, but she didn’t know she was abandoned and that her mother was the victim of rape until she was older.

"When I finally started to accept the fact that I was unwanted and thrown away like trash, I had to kind of dig deep and find my purpose," Kelsey said.

All 50 states and D.C. have some sort of safe haven law, which allows a person to legally surrender an infant at a safe facility like a hospital of fire station. Kelsey says the boxes add the touch of complete anonymity.

"It takes the face to face interaction away, the shame, the judgment, all of that, but allows her to save her child's life," Kelsey said.

According to the National Safe Haven Alliance, a group that advocates for such laws, more than 4,500 infants have been safely recovered since the laws took effect in 1999.

Critics of the laws say they remove fathers from the process and don’t offer adequate resources to people in crisis or who would rather have an abortion.

Kelsey says she’s heard the criticism but contends the boxes are not a solution for abortion or a reaction to the recent Supreme Court ruling.

"If some states continue with abortion, you know, let them do that," Kelsey said. "If they… states that do outlaw abortion, these are your legal options now. I don't know if we're going to get busier, but I can tell you the phones are going crazy and so is the emails."

She says the only thing that matters now is the mission.

"When a mother basically says, 'I want what's best for my child, and it's not me,' that's heroic," Kelsey said.