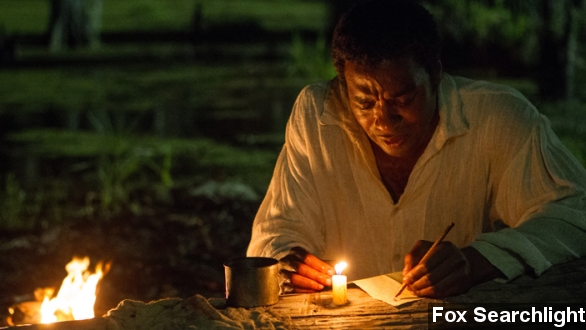 The Screen Actors Guild Awards nominations were announced Wednesday, and "12 Years A Slave" leads the pack. But find out who was snubbed, too.

The nominees for this year's Screen Actors Guild Awards were announced Wednesday. Here are the highlights.

​Up for best actor in a movie: Matthew McConaughey in "Dallas Buyers Club," Tom Hanks in "Captain Phillips," Forest Whitaker in "Lee Daniels' The Butler," Chiwetel Ejiofor in "12 Years A Slave" and Bruce Dern for "Nebraska." (Via Focus Features, The Weinstein Company, Fox Searchlight, Paramount Vantage)

Of course, the SAG Awards honor actors and actresses in both movies and TV but not the productions themselves. They're the first major awards nominees announced of the season and are considered potential previews of Oscar nominations.

The nominations build an already big Oscar buzz for "12 Years A Slave." It led the SAG pack with the most nominations: four. (Via Fox Searchlight)

Some notable nods in the best supporting male category — Barkhad Abdi is nominated for "Captain Phillips" in his first-ever acting role, and the late James Gandolfini was nominated for "Enough Said." (Via Columbia Pictures, Fox Searchlight)

And TV shows are nominated in both comedy and drama categories. For its final season, "Breaking Bad" is walking away with four nominations. (Via AMC)

Still, there are the snubs — Robert Redford wasn't nominated for his role in "All Is Lost." Last week, he won the New York Film Critics Circle award for best actor. And many are noting "Mad Men" failed to get any nominations, which is far from usual for the critical darling. (Via Roadside Attractions, Los Angeles Times)

The SAG Awards air Jan. 18 on TBS and TNT. Nominees for the Golden Globes will be announced Thursday.