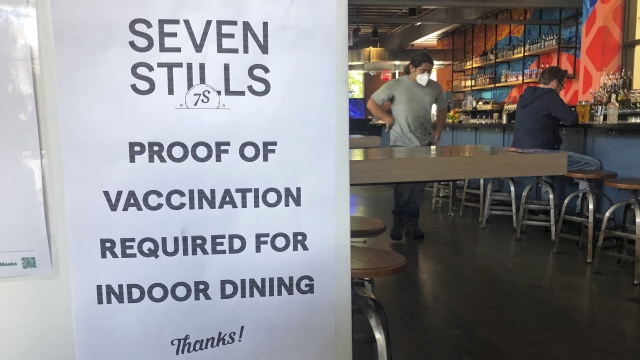 The new rules go into place next Friday.

The mandate will be more stringent than the one announced by New York City Mayor Bill De Blasio last week. San Francisco will require proof of full COVID-19 vaccination for all customers and staff, while New York mandated proof of at least one dose for indoor activities.

It will take effect Aug. 20, but businesses will have two more months to verify employees' vaccination status "to preserve jobs while giving time for compliance." The mandate does not apply to people ineligible for vaccines, including children under 12.

The Chase Center, home to the Golden State Warriors basketball team, reacted to the news by asking ticket holders to a Sept. 15 rock concert to show proof of vaccination. AEG Presents, the giant concert and live event promoter, also announced Thursday it will require proof of vaccination for COVID-19 to attend its shows and festivals starting Oct. 1.

In addition to the U.S. Centers for Disease Control and Prevention paper cards that people get when they are vaccinated, California has established an online record with a bar code that vaccinated people can use to prove their status. Breed said a photo of the CDC card will suffice, and that it will be up to businesses to enforce the requirement. Proof of vaccination issued by foreign governments is also acceptable.

The goal is to raise the vaccination rate in a city where 78% of the eligible population already is fully vaccinated, she said. San Francisco was among the first to ban large gatherings and close schools at the beginning of the pandemic and has been at the forefront of other COVID-19 restrictions, including requiring all city employees to be vaccinated without the option of testing regularly.

Los Angeles is considering a similar vaccine requirement, with people needing at least one dose before going to indoor restaurants, bars, gyms, movie theaters and other venues. Leaders there voted Wednesday to direct city attorneys to work out the details.

Also Wednesday, Gov. Gavin Newsom said all employees at public and private schools in California will have to show proof of vaccination or face weekly testing.

Breed announced the mandate Thursday at the historic Vesuvio Cafe in North Beach, a favorite haunt of the beat poets. The cafe is among many San Francisco businesses that have already been requiring proof of vaccination indoors.

"Most people were really happy that we had started the policy. It took patience on everyone's part. So, the people who were impatient or didn't like the policy would just leave," Vesuvio co-owner Janet Clyde said.

"Having the weight of the government behind you, the science, the health department" makes it easier to enforce, she said.

He said he was forced to close his bar one night after the bartender got infected at another job.

A group representing nearly 100 fitness studios said the mandate would help avoid the capacity limits or another potential shutdown that hurt their businesses last year.

"We support the city's vaccine requirement for indoor fitness as it provides our clients with one more level of assurance that they can experience the mental and physical benefits of fitness in a safe, healthy environment," said Dave Karraker, a board member of the San Francisco Independent Fitness Studio Coalition.