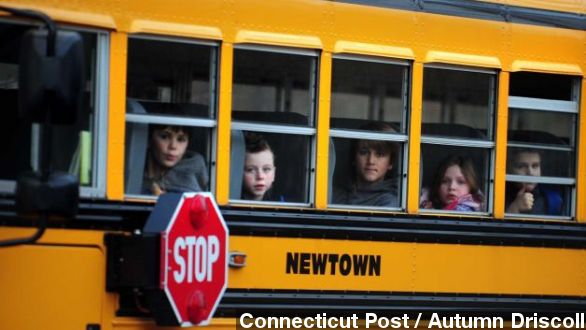 Almost a year after the deadly shooting at Sandy Hook Elementary School, investigators have released new details in a report.

A new report about the Sandy Hook Elementary School shooting nearly a year ago provides insight into shooter Adam Lanza's home life but fails to answer one major question — what was the motive behind his killings?

Forty-four pages long, the much-awaited report provides some history about Lanza and a more precise timeline of that day. ​We already knew he killed his mother at her Newtown home before heading to his former elementary school. (Via CBS)

The December shooting left 27 people dead, including 20 children, six school staffers and the shooter. In the report, investigators say they found several diaries and journals belonging to Lanza. (Via CNN)

Among Lanza's items were multiple photos of dead bodies, a New York Times article about the 2008 shooting at Northern Illinois University, dramatization videos and video games depicting school shooting or children being killed. The report states Lanza was obsessed with the 1999 Columbine High School massacre and with guns. (Via ABC)

The first call of the shooting came in at 9:35 that December morning. It took the first responding officer four minutes to get to the school. Within a minute of the first officer arriving, the shooter took his life. (Via Al Jazeera)

However, the report states after extensive interviews and evidence gathering, exactly "why" Lanza murdered the 20 children and multiple adults remains a mystery.

The report says, "Unfortunately, that question may never be answered conclusively ... The evidence clearly shows that the shooter planned his actions, including the taking of his own life, but there is no clear indication why he did so, or why he targeted Sandy Hook Elementary School." (Via Connecticut Division of Criminal Justice)

Investigators say all the guns used in the killings were purchased legally by Lanza's mother. They say Lanza suffered from mental health issues and told no one about his plans to shoot up the school.

Still, not everyone is interested in the release and rehashing of memories involving the Sandy Hook tragedy. The family of Victoria Soto — she’s the teacher killed in the massacre — released a statement calling the report “another blow” to the family.

"While others search for the answer as to why this happened, we search for the how. How can we live without Vicki? ... There is nothing in the report that will answer those for us." (Via WVIT)

Nearly 1,000 pages of evidence from the Connecticut state police still haven't been made public. No date has been set for its release. Monday's report ruled the investigation into the Sandy Hook shooting officially closed.