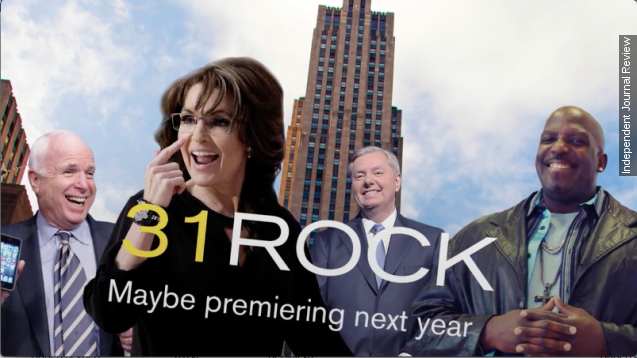 The politician delivers her own punchlines in "31 Rock," a spoof of Fey's hit show.

Tina Fey and Sarah Palin: They appear to be sisters separated at birth.

It's a distinction we noticed in the 2008 election and one we were recently reminded of when Fey hosted "Saturday Night Live" with Amy Poehler. Fey resurrected that red business suit and those famed frames to portray Palin once again.

Palin plays a TV writer sticking to her conservative values. She wants snowflakes on her Starbucks cup, a non-portion-controlled Big Gulp and a world free of political correctness.

The other cameos are just as rich: Sen. Lindsey Graham is the new Kenneth, Sen. John McCain is the ever-so-wise Jack Donaghy and Dot Com is still Dot Com.

It's a spoof seven years in the making, and you betcha we're glad to see Palin deliver a few punchlines of her own.