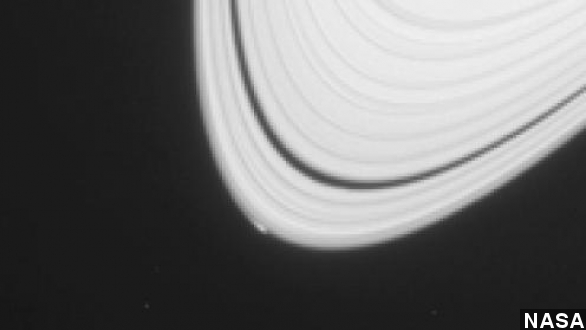 A bump in the rings could be a half-mile-wide miniature moon. It was found by accident in Cassini probe images.

Seems like we're always hearing about Saturn's moons: their weird features, unexplained mysteries and, of course, their possibility of hosting life.

Now, we could have a new chunk of Saturn rock to speculate about. Scientists think they may have just witnessed a tiny moon being born in the planet's rings.

They noticed a bump toward the outer edge of the rings in a photo snapped by the Cassini probe last year. The working theory is that the bump is a dust cloud clumping around a half-mile wide baby moon. (Via NASA)

The study's lead author said: "We hadn't seen anything like this before. ... We may be looking at the act of birth, where this object is just leaving the rings and heading off to be a moon in its own right." (Via Queen Mary University of London)

The new moon joins at least 60 brothers and sisters orbiting Saturn, all with unique characteristics. Not much is known about the new moon, but it does have a unique nickname: Peggy.

If confirmed, Peggy could help scientists understand how Saturn's moons form, which in turn could help them understand how the planets formed back at the dawn of the solar system. It's thought the two processes are similar. (Via European Space Agency)

But here comes the splash of cold water on the story: Slate's astronomer Phil Plait points out later pictures of that area of the ring show the tiny moon may have crumbled apart already. And at any rate, Saturn's rings are pretty much done making moons at this point. There's just not enough material left.

Another possibility is that the baby moon just drifted out of the Cassini probe's field of vision. We won't know for sure until the probe gets a closer look in 2016.