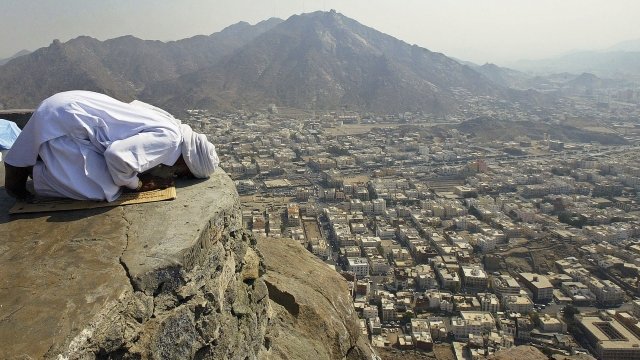 Qatar had accused the kingdom of politicizing the hajj, one of the pillars of Islam.

Saudi Arabia says it will allow all Qatari citizens inside the kingdom for the annual hajj pilgrimage without permits, despite an ongoing blockade imposed on Qatar.

The news was announced by Saudi Arabia's official Saudi Press Agency following a meeting between a Saudi crown prince and a member of the Qatari royal family.

It marks the first change to a months-long blockade imposed on Qatar by Saudi Arabia, Egypt, the United Arab Emirates and Bahrain.

Those countries accuse Qatar of supporting terror groups and attempting to destabilize the region, among other things. Qatar rejects those claims.

It also comes after Qatar accused the Saudis of politicizing the hajj. The country announced in July that Qatari pilgrims could only enter through Qatar's capital city, Doha. Now, the Salwa border point will be open for Qatari pilgrims to pass through "without electronic permits."

The assembly came to power through a vote that was heavily contested by the opposition.

The hajj pilgrimage is one of the five pillars of Islam; every Muslim who is able must make the trip to Mecca at least once in their life.

The Saudi Press Agency says Saudi Arabia's King Salman will fund Qatari pilgrims' trips to Mecca. But the authenticity of the deal has come into question.

That's because the Qatari who met with the Saudi crown prince is Sheikh Abdullah bin Ali bin Abdullah bin Jassim al-Thani. He's a member of the royal family, but doesn't hold any role in government. His family lost power in 1972.

Qatar's Foreign Minister, Sheikh Mohammed bin Abdulrahman Al Thani, said the move was "politically motivated," but that it was a step forward in relations.