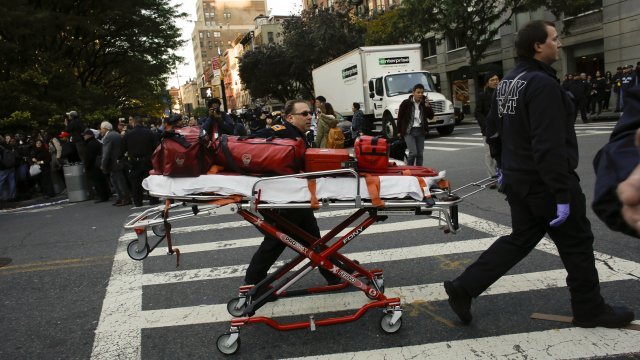 The man accused of killing at least eight people during a vehicular attack in New York City is now facing federal terrorism charges, one of which could carry the death penalty.

Joon Kim, the acting U.S. Attorney for the Southern District of New York, said in a press conference Wednesday, "It is incredible investigative work that has allowed us to bring these charges so soon after the attacks."

The U.S. Attorney's Office for the Southern District of New York announced charges against 29-year-old Sayfullo Saipov on Wednesday.

He's facing one count of providing support to a foreign terrorist organization — in this case, ISIS — and one count of "violence and destruction of a motor vehicle with willful disregard" to human safety.

The complaint says Saipov admitted his actions were inspired by ISIS videos. He allegedly had several ISIS-related images on his phone during the time of the attack.

John Miller, a New York City Police Department counterterrorism official, said: "He appears to have followed, almost exactly to a T, the instructions that ISIS has put out in its social media channels."

Saipov moved to the U.S. from Uzbekistan in 2010. Officials say they are still trying to determine his "path of radicalization."