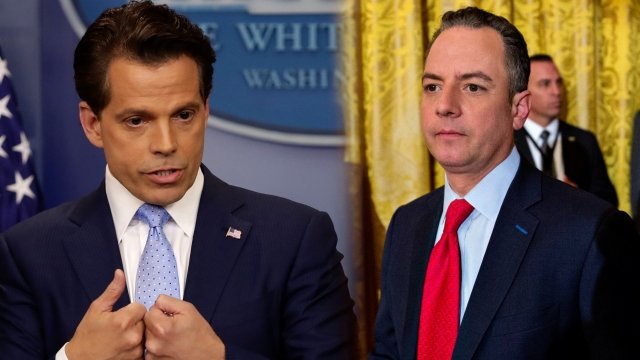 Scaramucci said: "Reince and I have been personal friends for six years. We are a little bit like brothers, where we rough each other up once in a while."

He said: "Some brothers are like Cain and Abel. Other brothers can fight with each other and get along. I don't know if this is repairable or not. That will be up to the president."

Scaramucci called into the show to address a tweet he sent Wednesday night. The tweet, which appears to reference Politico's publication of his financial disclosure form, said: "In light of the leak of my financial disclosure info which is a felony. I will be contacting @FBI and the @TheJusticeDept #swamp @Reince45."

Scaramucci's tagging of Priebus led some to believe Scaramucci was accusing Priebus of being the source of the so-called "leak."

Scaramucci Emphasizes There's Lots Of 'Love' In The White House

Incoming White House communications director Anthony Scaramucci used the term 20 times to describe his feelings for his colleagues and the president.

As Politico notes, the disclosure form is available to the public upon request.

Scaramucci ended up deleting the tweet. He later tweeted, "Tweet was public notice to leakers that all Sr Adm officials are helping to end illegal leaks. @Reince45."

"When I put out a tweet and I put Reince's name in a tweet, they're all making the assumption that it's him because journalists know who the leakers are. So if Reince wants to explain he's not a leaker, let him do that," Scaramucci told CNN's Chris Cuomo.

She also didn't directly respond to questions about whether President Donald Trump has confidence in Priebus.

Sanders said during Thursday's press briefing: "If the president doesn't, then he'll make that decision. We all serve at the pleasure of the president and if he gets to a place where that isn't the case, he'll let you know."

When asked a follow-up question, Sanders said: "We all come and have a chance to voice those ideas, voice those perspectives, and have a lot of healthy competition."