School Board Meetings Have Become A New Battleground 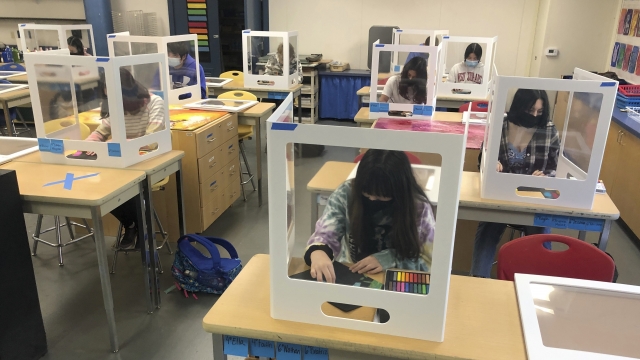 Amid the pandemic, local school boards were a battleground for partisan politics. With this election, the fight for control has reached a fever pitch.

The normally sleepy school board meetings of the past are no more. They are now becoming the new battleground in the culture wars. School boards are where angry voters are taking the fight.

"Do your jobs and take the masks off our kids and stick to education," one man said.

This year, election-tracking site Ballotpedia reports 215 school officials are being targeted for recall. On average, the last five years have seen just 26 recall efforts. This year, there have been 84.

The sides are sparring over hot-button issues like mask mandates in classrooms and curriculum, especially when it comes to teaching diversity and inclusion — sometimes based on the core principles of critical race theory, which argues racism is embedded in public policy and legal systems. The theory itself isn't taught in grade schools.

The behavior at school board meetings is even getting the "Saturday Night Live" treatment.

But the National School Boards Association says numerous threats to school officials are not funny. In Florida, protesters showed up outside the home of a school board member. Another had her face put on a wanted poster.

The Department of Justice says harassing and intimidating school officials has gotten so bad that it's forming a special task force.

School officials and education experts say all of the heated rhetoric is not good for kids.

"It's dangerous because this is a time when we really need good decision making out of those boards. And when these decisions become really partisan, and the meetings become really partisan, it can distort that decision making," a senior fellow at Brookings Institution said. "That will trickle down into what's happening in schools, and it's going to negatively affect students."

School board races are also pulling in big money across the country from teachers unions and political action committees — far above previous years.