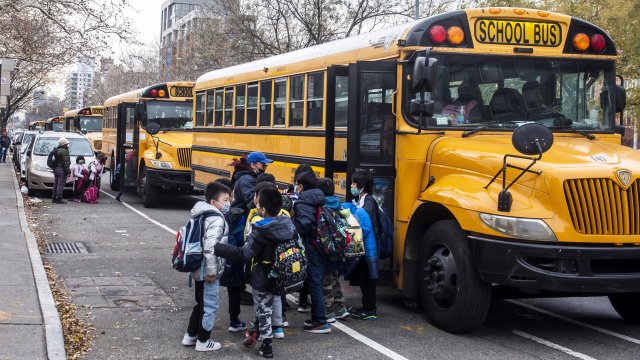 School districts across the U.S. aren't just dealing with teacher deficits in the classroom; they're also needing to fill bus driver seats.

In the Houston, Texas area, it's a competition with limited resources to find qualified drivers who will stick around for the long haul.

For many kids, school starts with the bus, and a video by the Houston Independent School District is designed to get more people to get behind the wheel.

But in Houston and elsewhere in the U.S., a bus driver shortage is presenting a bumpy road to the start of the school year.

In Houston, there was a $2,000 bonus for new drivers. Cypress-Fairbanks Independent School District, northwest of Houston, has 69 open bus driver jobs.

In Pearland, Texas, south of the city, there are 23 open bus driver spots with more competitive wages and benefits, but they're hopeful they can fill those positions after trainees qualify in October.

"But with regards to school districts, we find ourselves competing for the same pool of people all the time," said Sundie Dahlkamp, Pearland Independent School District HR executive director. "We raise our starting salary, our neighboring districts raise their starting salary, and we tend to battle over the same individuals."

"This is an ongoing issue that has plagued school systems like ours and schools systems across the state and across the country, really for the last year or so," said Bob Mosier, spokesman for Anne Arundel Public Schools in Maryland, where there were 64 vacancies. Mosier says part of the problem is that people are finding better paying jobs elsewhere.

"We are losing drivers at our other school systems to places like Walmart and Amazon, who are offering more lucrative packages for their services," Mosier said. "That's an issue we've been dealing with."

The pandemic also prompted some older drivers to retire, contributing to the shortage.

Getting commercial drivers licenses for their replacements has also become an issue in some places.

"There's a huge backlog for that training and that testing, so that's that's holding up if there are candidates," said Dr. David Bowlin, director of field services and transportation for the Ohio Department of Education.

A quarter of school districts enlisted staff to add bus driving to their regular duties.

In Ohio, some districts are requiring students who live close to school — within two miles — to find their own way to class.

In Fort Myers, Florida, Shonta Mcleod Stewart has been driving a school bus for the Lee County school district for 16 years. At first, she was reluctant to take the job.

It turns out, she likes it.

"We are responsible to get these children to and from school," Stewart said. "It’s a very responsible job. You have to be attentive, and you have to follow the rules. Safety is the main key."