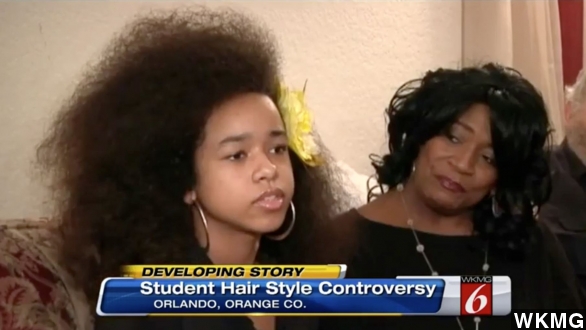 An Orlando girl may be kicked out of school because her hair is too puffy, which school administrators say causes a distraction.

A 12-year-old girl in Orlando is reportedly facing expulsion if she doesn’t change her hair. Vanessa VanDyke shared her story with WKMG:

“They just say you should change your hair, you should make it straight because it’s too puffy.”
“According to the VanDykes, Vanessa has one week to tame her mane following the school's code or she’ll be kicked out.”

Vanessa has attended Orlando's Faith Christian Academy since she was in third grade.

And says she's had big natural hair all year long, but administrators never said anything about it to her until after her family alerted the school to the teasing Vanessa was getting from classmates about her hairstyle. ​(Via Daily Mail)

"The student handbook says students' hair must be a natural color, and cannot be a distraction."

Vanessa's mother told WPLG that rule is too subjective.

"A distraction to one person is not a distraction to another. ... There have been people teasing her about her hair, and it seems to me that they're blaming her."

The anchors on KPRC point out this is the kind of issue you sometimes face when your child goes to a private school.

"Well, here’s the thing, we talk about this all the time. Private schools make their rules, and you can't, there's nothing you can do. There's no wiggle room. ... And it's like, fix it or you're out."

The school has refused to comment on the situation.