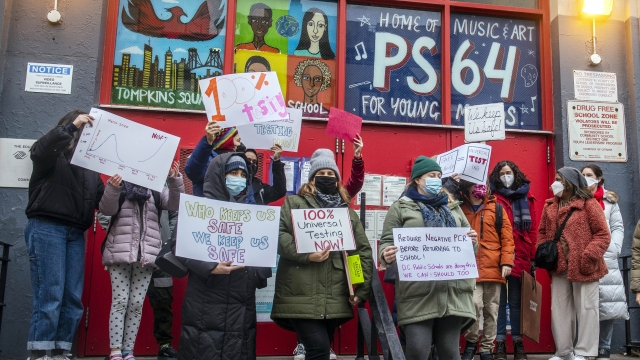 To help keep students in school, the CDC and U.S. Education Secretary Miguel Cardona endorsed test-to-stay as an alternative to 10-day quarantines.

Mask requirements are returning in some school districts that had dropped them. Some are planning to vastly ramp up virus testing among students and staff. And a small number of school systems are switching to remote learning — for just a short while, educators hope.

With coronavirus infections soaring, the return from schools' winter break will be different than planned for some as administrators again tweak protocols and make real-time adjustments in response to the shifting pandemic. All are signaling a need to stay flexible.

"Change has been the only constant in this fight," Newark Schools Superintendent Roger León wrote in a notice to parents before break. He announced Thursday that students will learn remotely for at least the first two weeks of the new year. The virus, León said, continues "to be a brutal, relentless and ruthless virus that rears its ugly head at inopportune times."

Long after the widespread closures in the pandemic's early days, school and elected leaders say they are using the lessons and tools of the past two years to try to navigate the latest surge without long-term shutdowns, which had woeful effects on learning and students' well-being.

Still, pressure from parents and teachers unions has added to the urgency surrounding safety measures as the Omicron-fueled surge sends up caseloads and puts children in the hospital in close to record numbers.

"They say kids do well (if infected), but who's to say my kid is not going to be that one," said Rebecca Caldwell, who is considering petitioning her Charleston, Illinois, district for a remote option that would let her keep her four sons, ages 17, 10, 7 and 5, home through the winter.

The first half of the school year brought Caldwell's family three scares from exposures. One, from a family member, kept the whole family in quarantine for 10 days. Her 17-year-old and 10-year-old saw classmates infected, and each underwent a nerve-wracking series of COVID-19 tests as part of a more recent "test-to-stay" policy.

"It's really scary because you worry about the domino effect, too," said Caldwell, whose own health issues led her to leave her restaurant job more than a year ago to lessen her risk.

In the nation's largest school system, New York City, 2 million at-home test kits provided by the state will be used to increase testing following the break, officials announced this week. Students whose classmates test positive can keep coming to school as long as their at-home tests are negative and they don't have symptoms.

Michael Mulgrew, president of the United Federation of Teachers, which represents New York City educators, questioned whether the new testing initiatives would be available in every school by the time schools reopened Monday.

"We are moving closer to a safe reopening of school ... But we are not there yet," he said.

In Chicago, the nation's third-largest school district, officials announced the purchase of 100,000 laptops over the holidays in case they are needed for remote learning in January, though district leaders said they hope to avoid a system-wide closure. The Chicago Teachers Union has proposed pausing in-person learning unless new safety measures are introduced, including negative COVID tests for returning students.

Los Angeles health officials last week announced tightened testing and masking rules for all employees and students when LA County public and private schools returned to campuses on Monday. Concerned by a spike of the Omicron variant, the county health department mandated that teachers wear medical-grade masks in class and students and staff wear masks outdoors in crowded spaces. Schools will have two weeks to comply.

To help keep as many students in school as possible, the Centers for Disease Control and U.S. Education Secretary Miguel Cardona endorsed test-to-stay in December as an alternative to the previously recommended 10-day quarantines. Hundreds of schools have adopted test-to-stay policies for students who have had contact with an infected classmate.

"The goal remains to keep all schools open for in-person learning five days a week throughout the 2021-22 school year and beyond," Cardona said in a message to schools marking the halfway point of the academic year. He said 99% of schools were open in-person in December, compared with 46% last January.

Out of more than 13,000 school districts nationwide, relatively few have announced plans to start remotely after winter break.

Citing the city's high infection rate, Detroit Superintendent Nikolai Vitti on Friday extended the winter break for nearly 50,000 students through at least Jan. 5 and urged them to get tested through the district. Tests are required for employees.

Ronald Taylor, superintendent of the South Orange-Maplewood School District in New Jersey, said a spike in cases and subsequent quarantining heading into the break had disrupted operations by forcing consolidation of classes where there weren't enough staff. He said the district would be remote the first week back.

"Like many other school districts, we have seen a consistent trend, after each of our school breaks, both Thanksgiving and our fall break in early November, there has been a sharp increase in our student/staff population of COVID cases," he said.

Masks also will make a return in some districts after break, including Hopkinton High School, the first Massachusetts public school to lift the mandate, in October. It was reinstated just before break.

In Florida's Miami-Dade County, where 1 in 4 people were testing positive for the virus, the school system announced Thursday that all employees, volunteers and visitors will be required to wear face coverings at schools and facilities, and students will be strongly encouraged to wear them. A state law prevents school districts from imposing mask mandates for students.

Some school systems are moving toward requiring vaccinations for students, but not anytime soon. In the Los Angeles school district, which was among the first to announce mandatory COVID-19 vaccines for students, a Jan. 10 deadline for students 12 and older was postponed until fall of 2022. Officials said the earlier date would have barred about 27,000 unvaccinated students from campuses.

The District of Columbia on Dec. 22 said all students, whether in public, private or charter schools, must be fully vaccinated by March 1.

Much about the Omicron coronavirus variant remains unknown, including whether it causes more or less severe illness. Scientists say Omicron spreads even easier than other coronavirus strains, including Delta, and it is expected to become dominant in the U.S. by early 2022.

In Ohio, where hospitalizations for COVID-19 hit a record high this week, the Ohio Hospital Association is asking schools statewide to consider mandatory mask wearing as cases continue to spike.

The patchwork of responses also includes plans in Woodbury, New Jersey, to bring students in for half days for the first week, sending them home with lunch so they don't have to remove masks in the building to eat.