Your Meat Isn't Fake, It's Designer: A Newer, Cooler Era Of Meatless 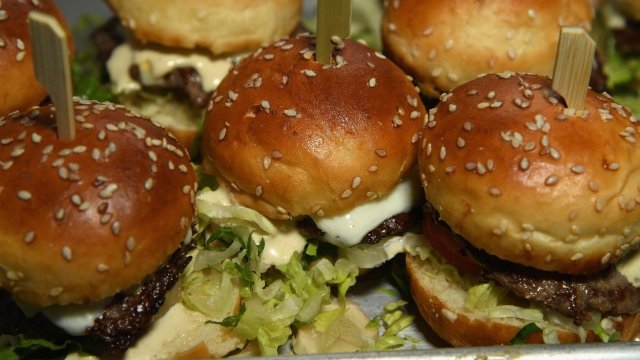 Scientists are developing ways to make real meat with no animals involved.

Who doesn't like to fire up the grill, drink a beer and flip some nice, chargrilled ... carrot fiber? Sounds weird, but those fibers are part of something new and delicious.

Designer meat is a thing, and it's way fancier than the cardboard cutouts your grandma bought at Piggly Wiggly. Companies like Impossible Foods, Just, Inc. and Beyond Meat are going high-tech to deliver the quality basics missing from so many vegan and vegetarian diets — believable substitutes that look and taste like the original.

There are "scrambled eggs" from Just, which are actually mung beans cooked up in the company's Northern California headquarters. Egg-less eggs that are vegan friendly. Or the Impossible Burger. It sizzles, has grill marks, and it is impossibly fake.

The company says "relying on cows to make meat is land-hungry, water-thirsty and pollution-heavy," so they and others have created alternatives by going completely outside the culinary box. Their tools are a hodgepodge of ingredients and chemical reactions. This is a menu, not a chemistry textbook.

Why Our Food Has Fewer Nutrients Than Ever Before

These agricultural issues could lead to even worse health outcomes than obesity.

UCLA experts explained what goes into designer meats' texture and taste. First, texture. Meat has a "fibrous quality," so companies traditionally began with soy protein, which is heated up or dissolved and then squirted out in a new shape, like chicken fingers.

Every company has its own recipe. Take, for instance, an Impossible Burger patty. Wired reports that the contents include wheat protein for firmness and chew, potato protein so it holds water, coconut with the flavor sucked out for fat and leghemoglobin for the "meat" flavor.

That brings us to the all-important taste. Tofu just doesn't cut it for some meat lovers. Most of meat's flavor derives from proteins inside being heated up (called glutamate), so scientists had to find a new way to infuse knockoffs with a familiar profile. To do that, UCLA experts say, this umami taste "can be added back with soy sauce, tomatoes, mushroom, and cheese in the form of sauces," then a dash of coloring or spices give it the right look.

The FDA hasn't fully endorsed the safety of these products (and doesn't always have to), but companies like Beyond Burgers argue that the nutritional facts speak for themselves with their burger that's free of GMOs, soy, gluten and cholesterol. The mung bean protein isolate used in Just Scrambled received FDA GRAS status — meaning "generally recognized as safe" — in 2017.

Customers are catching on. While meat sales are on the rise in 2018, so are meat mimics. Bloomberg reports that substitute sales are the highest they've ever been, topping $700 million a year and projected to keep climbing. Not bad for carrot fiber and all the other veggies finally getting the prime spot for grilling season.