Part-Pig, Part-Human Embryos Could Give Us Replacement Human Organs 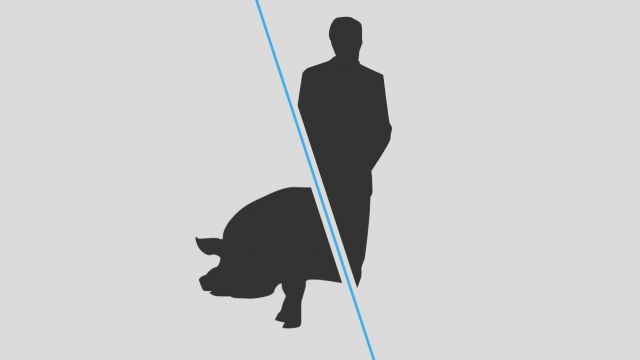 Scientists are figuring out how to grow human organs from stem cells in animal hosts but are cautious about creating brains this way.

Scientists at the Salk Institute have created part-pig, part-human embryos.

They used DNA editing tools to delete pig genes corresponding to certain organs, like the heart. Then, they injected human stem cells into the pig embryos, and the human cells filled the gaps.

Researchers are getting better and better at growing these combined embryos, aka chimeras. It's teaching them a lot about how our own cells develop and how different drugs work. It's also getting them closer to growing entire human organs for transplant.

Scientists Are Pushing Ahead With Human-Animal Hybrid Research

The federal government has plans to fund human-animal hybrid research. Here's what that means and why it raises ethical concerns.

The human cells in the pig chimeras had started to develop into muscle and organs after three to four weeks. The researchers could have let it go on longer, but doing that might have had ethics and animal welfare implications that nobody really understands yet.

Stem cells are a good choice for this research because they can grow into just about anything — including brain cells. There's a chance — even if it's a slim one — an animal that matures with human cells could end up with altered intelligence.

"If you have pigs with partly human brains, you would have animals that might actually have consciousness like a human. It might have human-type needs. We don't really know," New York Medical College professor Stuart Newman told NPR.

This is one reason why the government doesn't give out funding for chimera research right now. But the potential value of the science is getting harder to ignore. The National Institutes of Health has said it might start up grants, along with extra layers of ethics reviews, as early as January 2017.