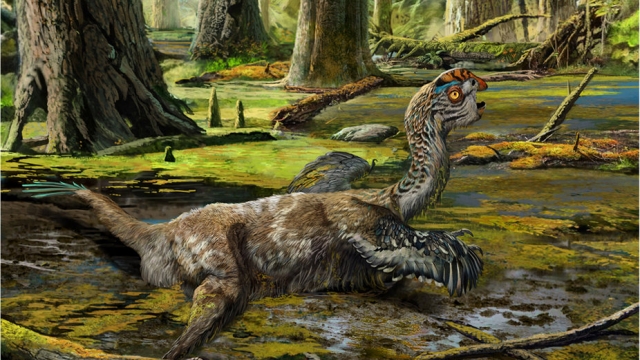 The fossil was recently discovered in China.

In case Steven Spielberg is running out of source material for the "Jurassic Park" franchise, scientists announced they've discovered a new kind of dinosaur.

Researchers told the journal Nature about the existence of Tongtianlong limosus, a name that has the awesome meaning "muddy dragon on the road to heaven."

SEE MORE: This Discovered Fossil Could Be The First Of Its Kind

An artist's rendering shows the new dino was roughly the size of a sheep. It most likely had a beak and feathers instead of teeth and scales.

Scientists nearly missed out on the fossil entirely. It was uncovered after construction workers in China practically blew it away with dynamite. Even though some of the skeleton was destroyed, scientists say it's still one of the best-preserved fossils of its kind.

"One of the reasons this skeleton is so complete and it's so beautiful is because it looks like this dinosaur got stuck in the mud, and it died there. So, very sad for the dinosaur, but that's a good thing for us," University of Edinburgh paleontologist Stephen Brusatte told the BBC.

It belongs to a group of bird-like dinosaurs called oviraptorosaurs that one paleontologist describes as "basically the last group of dinosaurs to blossom before the asteroid hit."

Oviraptorosaurs share a common ancestor with birds, and they can give us a good look at how the dinosaur population diversified just before extinction.

New discoveries like this run counter to the hypothesis that dinosaur populations started to decline before they went extinct about 66 million years ago. These heaven-bound mud dragons suggest dinosaurs weren't necessarily going away — just changing.