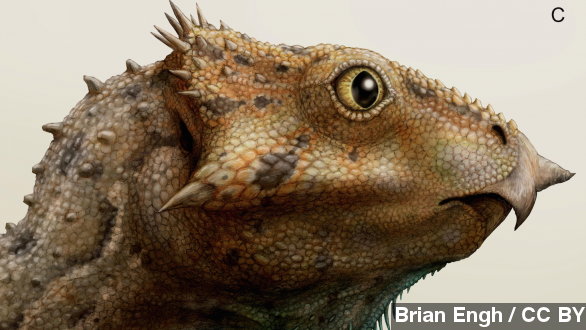 Scientists in southern Montana have found a fossil of one of the oldest ancestors of the famous triceratops, and it would've fit in your lap.

If you've ever wanted a dinosaur that you could fit in your lap... well that's kind of a weird wish, but we've got you covered.

Well, they found the skull anyway, which is significant, because up to this point all they had were teeth and skull fragments that indicated there were horned dinosaurs in the area, but not a whole lot more.

Researchers found the skull in the Cloverly Formation, and determined Aquilops, whose name appropriately means "American eagle-face," is the oldest-ever horned dinosaur found in North America. (Video via Youtube / jules1957)

Scientists didn't necessarily call it that for patriotic reasons, but instead because of the curved beak at the front of its face, which they say it would have used for eating vegetation.

Aquilops is a Ceratopsian dinosaur, coming from the ancient greek "Karos," meaning horn, which means Aquilops has some pretty famous descendants.

Namely, triceratops — the three-horned dinosaur that's been featured in popular media, from Jurassic Park to Transformers, and is the official state dinosaur of Wyoming. (Video via National Geographic)

According to the findings, Aquilops lived some 40 million years before Triceratops, and scientists theorize it probably came over from Asia via the Bering land bridge that once connected the two continents.

Aquilops was around 3 pounds and in the neighborhood of 2 feet long so, about the size of a bunny. But with a face like that, probably not quite as cuddly.