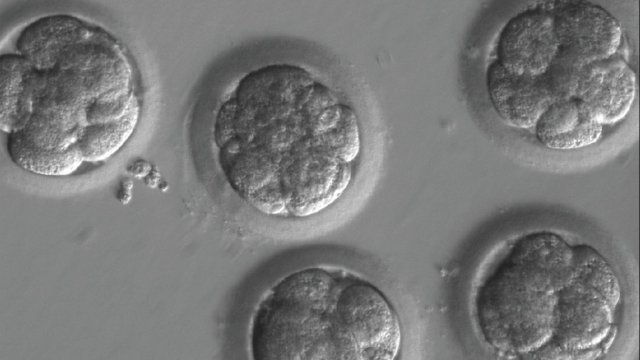 Researchers used a gene-editing technique called CRISPR to fix a mutation in some embryos, but it will be a while before the practice is widespread.

Scientists recently hit a major milestone that could one day ease dangerous hereditary problems in babies.

For the first time ever, scientists corrected a genetic mutation that can lead to a serious condition that enlarges the heart.

Researchers fertilized eggs with sperm from men who have the heart condition. Then they removed the mutated genes with an editing technique called CRISPR and injected healthy DNA into the fertilized embryo.

The scientists found that the male gene replicated that healthy sequence from the female gene.

Patients who have incurable lung cancer or who haven't responded well to other treatments will undergo the first tests.

The study's authors aren't sure why their approach was so effective, but it fixed the mutation in over 70 percent of embryos studied.

It'll be a while before this strategy shows up in clinical trials. Using federal funds for gene-editing is currently illegal, and some researchers say editing mistakes could be passed on for generations.

And the American public isn't keen on gene-editing, either. One poll found 65 percent of Americans think it should be illegal to alter the genes of unborn babies to reduce disease risk.