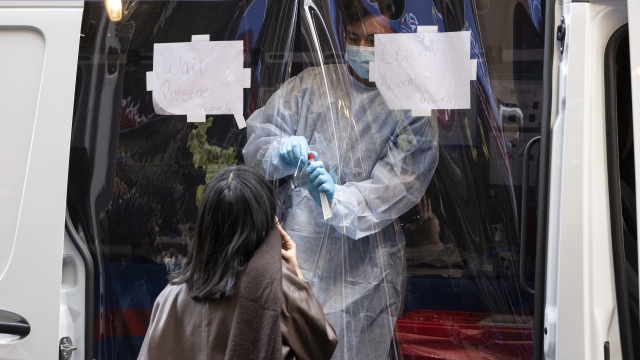 As soon as Omicron became known, one lab started doubling the amount of cases it's sequencing to look for that variant.

The race is on in the U.S. to chase down cases of Omicron, a new variant of concern now showing up around the globe and popping up in more states across the country.

So why the importance of knowing which variants are circulating in our communities?

"That's a tough question to answer because I think it just depends on your perspective on the situation. As a scientist and somebody in my position, to me, it's a public health issue," said Chris Booth, PhD, the CEO of FYR Diagnostics in Missoula, Montana.

The lab started in 2016 to focus on concussion technology, but quickly pivoted to testing and sequencing when COVID-19 hit.

Booth says surveillance is especially important when variants are emerging, so communities can react accordingly.

"Compared to earlier this year, when we were sequencing about 8,000 samples per week, we have increased our genomic sequencing capability," CDC Director Dr. Rochelle Walensky said during a White House press briefing this week. "And we are now sequencing approximately 80,000 samples per week — about 1 in every 7 PCR-positive cases. And that's more than any other country."

"That's how we're also going to catch something when something new starts to come out," Booth said. "If they didn't have the surveillance capabilities that they did in South Africa, which are really great, they might not have caught it as early on. It might have been a couple of weeks before somebody would have noticed it because again, we're only sequencing 10-15% of these things."

Sequencing catches new variants like Omicron, a strain health experts worry could pose a double threat of increased transmissibility and the potential to evade immunity.

"When you're looking that's the sequence of Omicron compared to Delta or the original strain, you see all the mismatches, all the mutations and everything like that," Booth said. "There hasn't been anything like it. Not even close."

As soon as Omicron became known, FYR started doubling the amount of cases it's sequencing to look for that variant, with plans to increase as needed.

"Sequencing is very time-consuming and it's also pretty expensive in comparison to PCR testing," Booth said.

That's why before sequencing, FYR redeployed a PCR test that actually screens for variants in all positive samples they process.

"We're very proud of our test," Booth said of the screening measure, which helps them prioritize what gets sequenced. "It works really, really well. And we continue to make improvements."

In Omicron, they look for something called an S-gene dropout. PCR tests target genes in the genome to look for the virus, including the S-gene. But Omicron has many alterations in that gene that make it hard to detect using PCR. Think of it as a molecular clue labs across the country are now searching for, including the University of Washington.

"We're in a much better place in terms of just our ability to find these in our lab," said UW School of Medicine Laboratory Medicine acting instructor Pavitra Roychoudhury.  "And I think this is similarly true for labs across the country and across the world."

The process is how Minnesota scientists found the state's first case of Omicron by going back over recently positive samples. Booth is confident any Omicron case that comes through FYR will be caught through that screening. But a different tool in the fight against COVID-19 spread could mean a blind spot.

"All of the rapid tests, the point-of-care tests like the Abbott ID NOW or any of the antigen testing that's being done — that might be able to indicate that someone is positive. But there's no way for us to be able to sequence that sample."

That's because once those rapid tests are processed, they're spent and can't be sequenced.

"There is a push right now to increase the amount of rapid tests being used, which is fine. But at the same time, for epidemiological reasons and really getting a grasp and understanding of the virus, it's not just catching it early," Booth said. "We're still, as a globe, trying to understand the severity of this virus."

Booth recommends anyone who tests positive on a rapid or at-home test gets a secondary PCR test or a second sample for a lab like his to sequence.