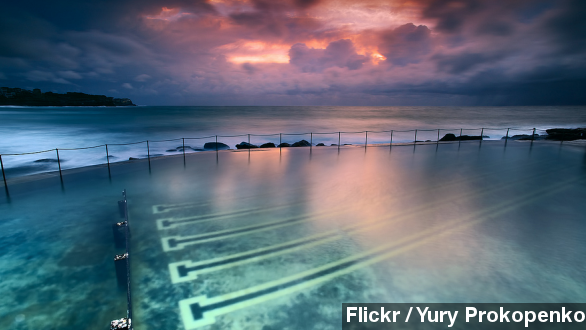 Scientists in Australia believe there are about 120,000 cubic miles of water underneath the ocean floor — 100 times more than we have used since 1900.

Researchers in Australia claim to have found a treasure trove of freshwater beneath the ocean floor.

The findings were first revealed in the scientific journal Nature Thursday. The authors of the study say there's "mounting evidence"  freshwater could be found globally.

The study, led by a scientist from Flinders University, says these reserves were formed hundreds of thousands of years ago. The water filtered through the ground before it ended up being covered by ocean water.

So just how much freshwater do scientists think we have under the sea?

The International Business Times reports scientists estimate there are 120,000 cubic miles of freshwater under the sea floor near places like Australia, North America, South Africa and China. The study's lead author says it's more than all the underground freshwater used since 1900.

And Gizmodo adds it's more than 20 times the amount of all the water in the five Great Lakes.

So if we potentially have all that extra water we didn't know was there, what should we do with it?

Scientists say if we want to use it for drinking purposes, the only ways to get it are by drilling on land or offshore. They're careful to warn drilling can be expensive and the supply would be non-renewable. (Via Voice of America)

But Forbes points out it might be a price some countries are willing to pay. The U.N. projects about half the world's population could be under so-called "water stress" by 2030.