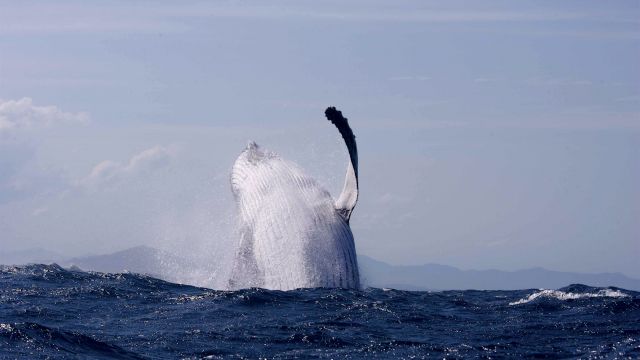 Scientists might have have figured out why some whales leap out of the ocean.

It's pretty common for whales to slap their fins and tails on the surface, but hurling a 33-ton body out of the water takes a lot of energy.

And because whales fly out of the ocean during migration when a lot of them fast, breaching must be important.

Turns out, several groups of humpback whales off the Australian coast held the answer. Researchers studying the whales think the mammals can communicate by flying out the water.

The results of the study were published in the journal Marine Mammal Science.

The whales studied reportedly breached more often or were more likely to breach when they were farther apart — a couple miles apart.

The Ocean Is Too Loud For Whales And Dolphins

Sonar and noise from ships can harm marine mammals.

The team thinks that has to do with background ocean noise. From far away, it'd be a lot easier to hear a giant thud than a smacking tail slap.

That theory seems to be an "aha" moment for some in the scientific community. A biologist not affiliated with the study told Hakai Magazine it makes "perfect sense."

"If there's a lot of noise, it might be easy to drown out," he said. "Leaping up in the air and splashing down is equivalent to the really keen kid in a classroom jumping up and down waving his arms."

Whales have a lot of ways to communicate with their pods. Scientists have tracked humming, grunts and even special clicking patterns the groups use to track or find food.

They've even detected regional "accents." A study from 2016 found a group of sperm whales in the Caribbean used distinct calls other pods around the world don't make.

But up to this point, breaching has been pretty mysterious. Turns out, it's likely a flashy way for the massive creatures to say "hello."