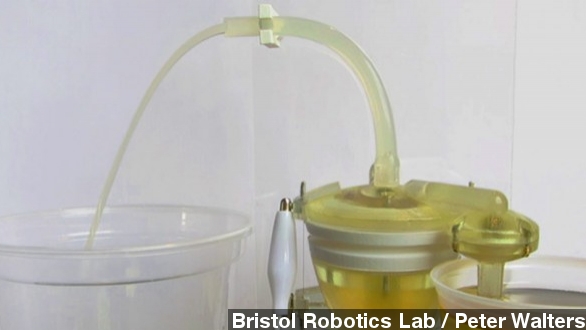 Researchers at the Bristol Robotics Laboratory have potentially found a new way to power their next robots: human urine.

Are you looking for a renewable, eco-friendly source of energy to power your new robot? Urine luck!

Scientists at the Bristol Robotics Laboratory have designed a pump to power their new line of environmentally friendly Ecobots. The system works like a human heart — but instead of pumping blood, it runs on ... well, pee. (Via YouTube / UWE Bristol)

This heart-like mechanism is intended to feed urine into a microbial fuel cell, where microorganisms will feed on chemicals in the urine, producing electricity in the process. (Via National Science Foundation)

Bristol researchers have been experimenting with urine-powered devices for some time now. The team initially tested their microbial fuel cells by recharging cell phone batteries back in July. (Via RedOrbit)

The new pump system still needs some fine-tuning before it's ready to power an actual robot. But lead researcher Peter Walters said he hopes the innovation will lead to self-sustaining Ecobots.

Walters said the robots "could perform environmental monitoring tasks such as measuring temperature, humidity and air quality. ... In the city environment, they could re-charge using urine from urinals in public lavatories. In rural environments, liquid waste effluent could be collected from farms." (Via The Engineer)

The team's research was published in the December issue of Bioinspiration & Biomimetics.