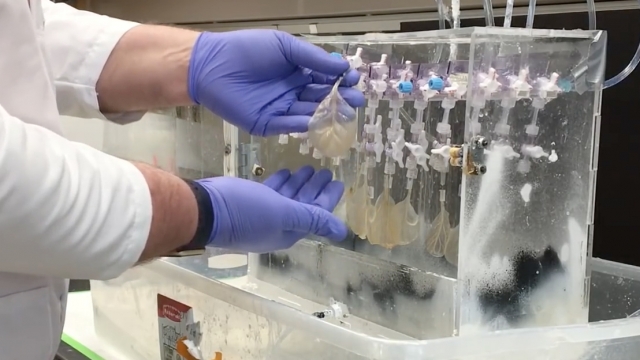 What do spinach leaves and human tissue have in common?

Veins. Lots and lots of veins.

That led researchers to try to graft human cells onto the leaves in hopes of creating artificial heart tissue.

The study was carried out by researchers at the Worcester Polytechnic Institute, the University of Wisconsin-Madison and Arkansas State University-Jonesboro.

WPI graduate student Joshua Gershlak said, "So the idea here is we have this very thin, flat piece of tissue that already has that vascular network in there, and so we should be able to potentially stack up multiple leaves and create a piece of cardiac tissue."

First, a detergent was used to remove the plant cells.

Next, human cells were grafted onto the leaf. After five days, the cells were able to contract and move a blood substitute through the leaf's veins. And those cells kept beating — for three weeks.

"The major limiting factor for tissue engineering or graft and getting it to be into the clinic is the lack of a vascular network," Gershlak said. "So techniques can't fabricate microvasculature the way that the body needs it."

The researchers hope to eventually create tissue that could survive on its own within a human host body.

Smoking Pot Might Increase Your Risk Of Stroke And Heart Failure

With marijuana use, patients' risk for stroke went up by 26 percent, a new study found.