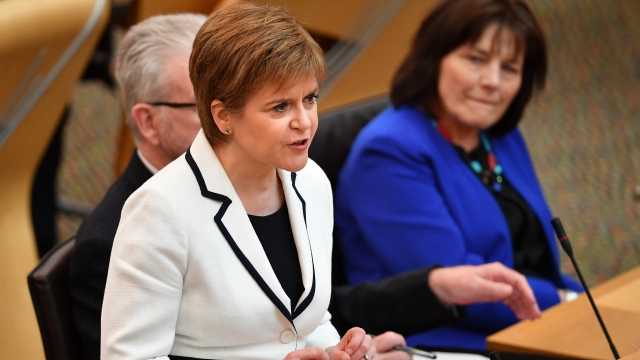 First Minister Nicola Sturgeon announced new plans Wednesday to set up a second nationwide vote on independence from the U.K.

Scotland's leader has called for the country to hold a second vote on independence from the U.K.

First Minister Nicola Sturgeon announced new plans Wednesday to set up a second nationwide vote for independence. She argued the U.K.'s handling of Brexit, as well as the negative economic impacts Scotland would face by leaving the EU, are enough reason for the country to choose whether to leave or stay with Britain.

Sturgeon said Scotland's Parliament would draw up and vote on a bill before the end of 2019. If it passes, then the plan is for the country to hold an independence vote by May 2021, which is when the current Parliament's term ends.

Scotland's first independence referendum took place prior to Brexit in 2014, with a majority of voters choosing to remain part of the U.K. But an even larger majority of Scottish voters also voted to remain with the EU during the Brexit vote in 2016.

In response to the first minister's comments, the U.K.'s Scotland minister said, "Sturgeon continues to press for divisive constitutional change when it is clear that most people in Scotland do not want another independence referendum."