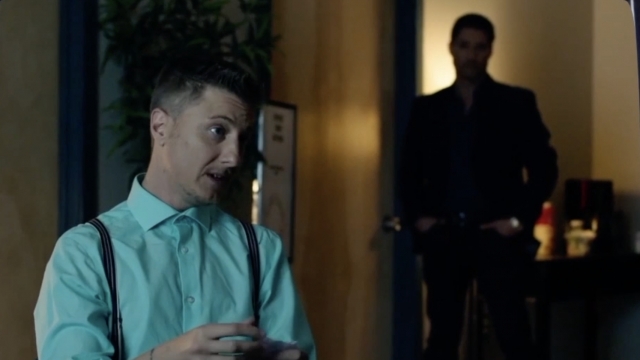 Scott Turner Schofield, the first transgender man to be nominated for an acting Emmy Award, advocates for honest portrayals of trans people on screen.

Out of more than 600 regular and recurring LGBTQ+ characters on TV this year, just 6% are transgender, according to a report from the media monitoring group GLAAD.

But a decade ago, there weren’t any transgender characters on TV at all.

Over the past decade, actresses like Laverne Cox and MJ Rodriguez paved the way for transgender artists in Hollywood for their groundbreaking roles in “Orange is the New Black” and “Pose”.

“When I started as an actor... it was before 'Orange is the New Black,'" said Scott Turner Schofield, an actor, producer and consultant. "It was before the transgender tipping point happened, like long before any of that. I couldn’t get roles in anything. There were trans actors, but none of us were out in the way that we are now.”

In 2020, Schofield became the first transgender man to be nominated for an acting Emmy for his guest role in the drama “Studio City.”

Beyond acting, Schofield has also worked as an inclusion consultant — helping tell honest and humanizing stories about living as a transgender person.

He helped create the character of Jules for HBO Max’s “Euphoria,” and he consulted on Disney’s “Zombies 3,” which is the company’s first live action feature film starring a non-binary lead actor.

On-set, Schofield says there were real initiatives to honestly portray transgender people and write authentic LGBTQ stories. But off-screen, Disney earned the wrath of the LGBTQ community for financially supporting Florida lawmakers pushing for limits on classroom discussions of sexuality and gender.

The company also faced heavy criticism by employees all over the country, as well as members of the Disney family. It was only after nationwide protests that the company publicly condemned the Florida measure that critics call the Don’t Say Gay bill.

“There are many initiatives at Disney that I'm now aware of, and a part of that is proactively doing what they weren't doing before because they listened and they changed as everyone has the ability to do," Schofield said. "Many of the decision makers are people who want a better world for their children, which like, everybody wants, and that’s wonderful.”

A slew of Schofield’s work is coming out this summer: Disney’s “Zombies 3” debuts July 15, and Amazon’s “Anything’s Possible” — where Schofield worked as the impact producer — debuts July 22.