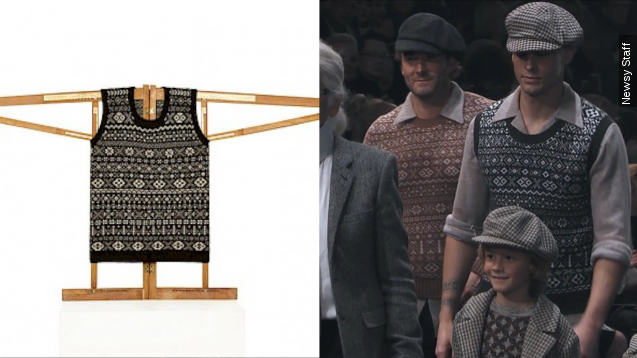 A knitter in Scotland claims fashion powerhouse Chanel copied one of her Fair Isle designs without permission.

This walk around a runway in Rome may have just landed Chanel, and Karl Lagerfeld, in some trouble. That's because those cozy-looking sweaters looked a little too familiar to a knitter in Fair Isle, Scotland. (Video via Chanel)

Mati Ventrillon posted this picture on Facebook and wrote, "Earlier this summer two Chanel staff visited Fair Isle and bought some of my stock garments with the understanding that the garments were for research."

Months later, a very similar product appeared on the runway in Rome during a show meant to appreciate "the fine craftsmanship that its artisan partners bring to the house's collections." But Ventrillon says her designs were plagiarized.

She claims the garment shape, color choice and pattern arrangement in Lagerfeld's sleeveless vest were copied from the design she originally crafted to celebrate the queen's Jubilee.

This isn't the first time Chanel has been accused of copying. Back in 2012, a French knitwear company said Chanel "slavishly copied" several of its crocheted designs. Chanel forked over 200,000 euros to settle that one.

But there's a bit of gray area surrounding copyright of designs. Countries across the globe have different takes on the matter. With her business based in the U.K., Ventrillon would've had to register her design with the government to formally protect it.

Furthermore, if she is registered in the U.K. and decided to file a suit against Chanel, it would only affect the copyrighted item sold in the U.K.

Ventrillon didn't mention on her Facebook if her designs are protected under copyright law or if she plans to file a lawsuit.

In response, a spokesperson with Chanel issued a statement to Newsy that reads in part, "Chanel will credit Mati Ventrillon by including the words 'Mati Ventrillon design' in its communication tools to recognize her as the source of inspiration for the knitwear models in question. Chanel recognizes that this situation resulted from a dysfunctionality within its teams and has presented its apologies."