Fate Of LGBTQ Workers In 28 States Hinges On SCOTUS Decision 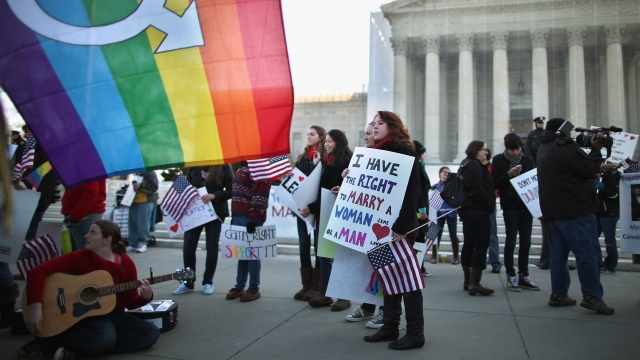 LGBTQ employees in more than half of U.S. states are not protected by law. The Supreme Court could cement their fate.

This week, the Supreme Court heard three cases about whether it is legal to fire someone based on a person's sexual orientation and/or gender identity.

There are more than 9 million employees who identify as LGBTQ in the U.S., according to the LGBTQ Workers Center. And more than half of U.S. states don't have laws protecting employees who identify as gay or transgender. Many workers and businesses in those states -- like Sam Inman, an IT manager for Bumble in Texas -- are wondering how the court's decision could impact them.

"As a queer worker, I feel protected at my specific employer because they have taken the time to really create a safe place for queer people. In the state at large, I don't feel particularly safe because there are areas of the state where people could definitely claim religious freedom to deny me employment, be based on who I am as a person."

Sam chooses to work only with employers who provide equal protection. Otherwise, he could get fired based on who he is.

At the heart of the court's decision is whether sexual orientation and gender identity are covered under the word "sex" in Title VII of the Civil Rights Act of 1964. It bans employment discrimination based on "race, color, religion, sex, and national origin."

Opponents of gay employee rights say drafters of Title VII didn't intend to protect gender orientation and identity in its language. When the Civil Rights Act passed in 1964, the federal government still banned gays in civil service until it was lifted 11 years later in 1975.

But Northwestern law professor Andrew Koppelman believes that if conservative justices on the court follow their previous history of interpreting the text literally, then they should be in favor of protecting gay and trans employees.

However, Koppelman believes the court is politicized.

But more than 200 businesses that employ people who identify as LGBTQ — including Amazon and Google — are hoping that economic interests will supersede political ones.  They filed an amicus brief to inform the court that protection against discrimination is good for business.

Tina Cannon is the Executive Director of the Austin LGBT Chamber of Commerce. She says, "we want the best and brightest coming to Texas to work. And these types of discriminatory ordinances and laws make it so that they don't come here. So businesses have long since been leading the charge and I'm glad to see 200 plus names on that list."

What's more, states with anti-discrimination laws foster greater innovation. A study found firms in these states had an 8% increase in patents over a 30-year period, likely due to pro-LGBT traits correlated with creativity like liberalism, diversity and open-mindedness, according to the researchers.

Cities that care about innovation in states without anti-discrimination laws, like Austin and San Antonio, have gotten around the lack of state protections by passing their own laws.

Cannon says: "There's nothing that stops a local municipality, or a state for that matter, to enact their own non-discrimination protections within either their local jurisdiction or at the state level. So should the verdict not go our way, then I would encourage folks to speak up and speak out and impact change at the local and state level where they are. "

Cindy Hyndman is the co-counselor of the amicus brief filed by more than 200 businesses supporting the employees. She says the court's decision won't matter to businesses who already give employees equal protection.

Hyndman says, "it may not necessarily have an impact on the businesses, but the way the court rules will have a huge impact on employees, especially for those who live in states where there's not the protection of state laws and discrimination state law. The best protection against discrimination is working for a company that doesn't discriminate in the first place. And the laws are the fallback for when, when that doesn't happen."