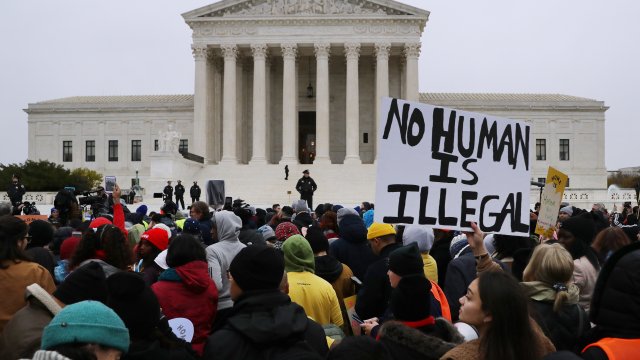 Newsy was inside the courtroom for one of the most controversial and high-profile cases of the Supreme Court term.

After an extended legal battle that has kept DACA mostly alive, the Supreme Court will soon decide whether the Trump administration can strike down the Obama-era policy. DACA is the program that shields from deportation around 700,000 undocumented immigrants who came to the U.S. at a young age.

On Tuesday, the justices heard oral arguments from the government and the plaintiffs. And Newsy's Ben Schamisso was inside the courtroom to take it all in.

Keep in mind that no one here disputes the White House's ultimate right to end DACA. The only contention is whether the Trump administration violated administrative law when it tried to end DACA in 2017. And is it even up to the courts to decide so?

The Trump administration argues that since President Obama created DACA in 2012 using executive discretion, the next president should be able to use the exact same discretion to revoke it — without needing to provide an explanation that the court deems sufficient.

The plaintiffs, of course, strongly disagree. They say the White House's reasoning for trying to terminate DACA — that the policy's legality was "at minimum questionable"  — is not good enough.

That's because, in their view, DACA is perfectly legal. In fact, the plaintiffs say, de-prioritizing the deportation of young undocumented immigrants brought here as children draws from a concept known as "prosecutorial discretion," which has long been recognized in federal law.

Justice Sonia Sotomayor had one of the strongest quotes in support of the plaintiffs. She said she believed the administration's true reason for ending DACA "is not about the law" but "about our choice to destroy lives."

Many justices from across the ideological spectrum questioned the virtue of making this case last even longer by asking the government for a better explanation that would allow it to properly terminate DACA.

Now, here's an argument that people on both sides tend to agree with: It should be up to Congress, and not the executive branch alone, to come up with a solution for "Dreamers."

Said Clara Kim, a DACA recipient who was in the courtroom: "I just really pray for them to wake up and notice us and acknowledged that our opportunities, and everything that we've invested — everything that we have put into, our hard work — are on the line. And even if they don't, we'll fight even harder."

Said Martín Batalla Vidal, a DACA recipient and one of the lead plaintiffs:

"Regardless of the outcome, we've been in this fight for so long, and we're going to keep fighting. Like I keep saying: a piece of paper does not define who we are. This is our home."