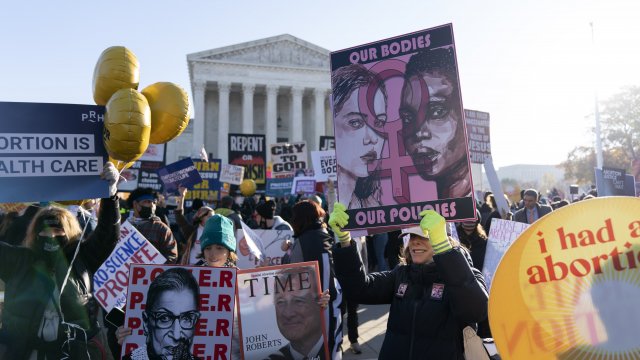 The justices are being asked to overrule two cornerstone decisions in the context of a Mississippi law that bans abortion after 15 weeks.

Crowds gathered outside the Supreme Court Wednesday as justices took up a case that could fundamentally transform Roe v. Wade.

The court's makeup could play a critical role with it having a conservative majority.

The six right-leaning justices signaled they may be open to rolling back abortion rights.

"If we think that prior precedents are seriously wrong, if that, why then doesn't the history of this court's practice with respect to those cases tell us that the right answer is actually to return to the position of neutrality and not stick with those precedents in the same way that all those other cases didn't?" Justice Brett Kavanaugh said.

Mississippi's abortion law is what's at issue. It was signed and blocked in 2018 and bans most abortions after 15 weeks.

The state wants the justices to disregard precedents set by Roe and Planned Parenthood v. Casey, which upheld Roe in 1992. The precedent prohibits states from banning abortions before the point of fetal viability, or around 23 weeks. They argue the nearly half-a-century-old court decision was wrongly decided.

"I read your briefs, your brief to say that the only real options we have are to reaffirm Roe and Casey as they stand or to overrule them in their entirety," Judge Samuel Alito said.

Mississippi argues abortion is not a constitutional right, and that states should be the ones to make their own policies.

"Roe v. Wade and Planned Parenthood haunt our country," Mississippi Solicitor General Scott Stewart said. "They have no basis in the Constitution. They have no home in our history or traditions. They've damaged the democratic process."

Chief Justice John Roberts and the other conservatives on the bench questioned whether the "viability line" makes sense — an indication a change may be on the way.

The lawyer for the abortion clinic challenging the state's law argued that banning abortion as early as 15 weeks would place undue burden on women.

"It's critical to women's equal status in society, and that's why we think it would be devastating for the court to take this right away right now," Julie Rikelman, lawyer for the Center for Reproductive Rights, said.

"Will this institution survive the stench that this creates in the public perception that the Constitution and its reading are just political acts?" Justice Sonia Sotomayor said.

"To overrule under fire, in the absence of the most compelling reason, to re-examine a watershed decision, would subvert the court's legitimacy beyond any serious question," Justice Stephen Breyer said.

A ruling in the closely watched case likely won't come down until May or June of next year.

If the justices uphold the Mississippi law, it would be much easier for states to ban or more seriously restrict abortion rights, with one estimate of 26 states fully banning abortions.